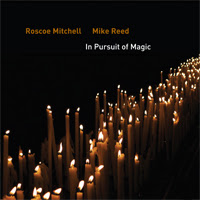 
A meeting of an avant-guard legend and a few decades younger disciple, one of the most active animators of the modern jazz scene in Chicago- ain't that a definitive prove of art's continuity? Roscoe Mitchell and Mike Reed, that duo not so long ago mesmerized the audience, my fortunate self included, during the Made in Chicago festival in Poznan. Together, they created a world of sculpted sounds, in constant "pursuit of magic", a sucessfull pursuit I'd like to add as I believe the concert to be THE concert of 2013.

There's linear cohesity to Mitchell's playing and uniqueness to his sound - carefully crafted, intrinsically structural, in constant movement and in continous evolvement. He creates myriad of notes, with just slight modifications rephrases the line, analyzes its every possible form and angle. A sort of musical laboratory, with attention to every possibile detail. Not experimental - because that would mean the result is left to chance. Instead it's strictly methodical, showing a profound knowledge of the instrument and it's many possibilites. His playing, ever enigmatic, is surreal and pure in its abstract logic.

Mitchell's playing might seem overwhelming, overabundant in abstract ideas. It's Reed's drumming to provide a more real, "down to earth", emotional backbone - his drums seem to have life on it's own - colourfull, vivid, pulsating. His playing surrounds the saxophones with a living and breathing, polirhythmic enviroment. Of particular beauty is his melodic use of the metal tongue drum, with the touch mic attached to it, the instrument developes an electro-acoustic transcendental sound.

The cd features two long improvsiations  "Constellations Over Denmark" and "Light Can Bend" both recorded on the concert in April 2013 at Constellation in Chicago.
"Constellations" moves from the hypnotic research of hushed sounds, breathing and resonance (the particular drums frequency mimicks the wind's shriek) to a full-tempo galopade with the tenor twisting the musical line, followed closely by a fast pace drums pulse.
"Light Can Bend"  begins with a the lyrical, and soulfull tenor tone, gently weaving the spare melody, encircled by light percussion thrill. Around 10 minutes into the piece, the playing becomes more intense, the interval jumps more sudden, the sounds sharper. And so they go fearless into the labirynth, with Mitchell's tenor and Reed's drumming circling around each other in a continous spiral flow for a long  while. Quite frankly a bit of a hypnotic mindblow. Mitchell's solo coda and melodic closure brings us back to the reality.

The pursuit of Magic never stops as the magic lives only in the moment, in the act itself. Fortunately such act can be recorded, and (the echo of) the expereince re-lived. The recording catches two masterfull magicians in the act, so don't try to learn the trick, just follow them as they show you the amazing new worlds and all its wonders. A definitive recommendation.