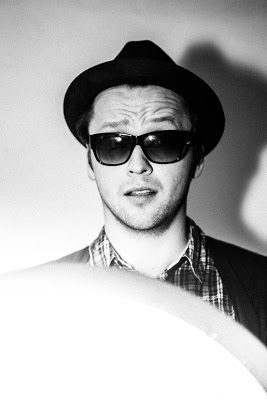 Here's the last piece of the interview with Tomasz Dabrowski. Big thanks to Tomasz for the talk and to Malgorzata Michalska who did come up with the idea for the meeting.

(you play a very specific instrument, you call it „balkan horn”, can you tell more about it?)

This is an instrument I got at a bargain price from a gentleman in a village near Łódź city. I found it on allegro [a popular auction website], no one wanted to buy it. I saw it and got very intrested – it looks very old, and most of all it looks very strange, with a huge bell for example.
I turned it has a very different sound as well. There are those technical matters I'm not really an expert in. If you play trumpet and flugelhorn, you have to use two different mouthpieces. Same thing if you play in a small combo or you play in big band. If you play lead part you have to use a shallower mouthpiece so the sound would be more upfront, you're leading the section, the whole big band as a metter of fact. I'm really terrible at it, and that is for the biggest advantage of my balkan horn, I can easily play with the same mouthpiece I use on the trumpet but the sound is very different, ambitus is larger, the articulation is different.
The way this is instrument is built nobody can tell me what it is. I know it's from the 60s, I even wrote to the manufacturer but they were of no help as well. It's very fragile, you could crush it in your hands, if you hit it gives away more of a „plastic” sound rather than „brassy”. It allows you to play also with the tuning. It's a sort of a laboratory, you can always experiment with new sounds.

(I think I recall Ambrose Akinmusire talking about how the temperature or blood pressure could change the way he sounds, what are your ways to practice the instrument or habits you acquired during those years)

Somebody once asked Dexter Gordon how come he can play so well while being drunk and he said it's because he practices while being drunk as well. I think one need to be vary carefully about so called juju's, musical rituals. Trumet requires a great deal of discipline, you need to stay in shape. As I'm home for Christmas, everyone's sitting at the table, and I need to rehears this or that. Firstly, to have an excuse to stop eating, secondly, because I know If I don't do it now, I will have to catch up later.

It's a brass instrument, which means it's different as well every day. You can't learn it once and be done with it. You're a doctor really, you need to check every day what's working, what needs some more practice so it would function properly.
You thinks sometims it's a problem with the blast, or articulation and it turns out often it's because of the breathing. Peter Evans taught me that, he asked me if I practice breathing, and I replied I had it covered ad the very beggining. He said he used to thought that as well. You need to keep going back to the very elementary things. You need to keep them straight.
Breathing, articulation, air blast. On a daily bases as you start playing those are all seperate issues, the thing is how to put them together. It requires practice, you need to find ways that work for you and let you keep the frame straight.
I had trouble with that, for many yearts. I'd practice while watching television, it doesn't work. This instrument demands focus and discipline.

I became very interested in the teaching of Arnold Jacobs, he was the lead tuba player of the Philharmony in Chicago. One of his postualtes was this: it doesn't matter what it looks like, what's crooked, what's slipped out. The note, its sound, what you play it is a direct result of what you have in mind. This is how I see it now and how I'm trying to teach my students.

I think you're really learning to play music, you're trying to find a way to express yourselve, the trumpet is just a tool you chose and you use to do it. You need to shorten as much as possible the distance between what's on your mind and what comes out of the instument.

This works the same way with the more technical issues. For example, if you want to play a high note, some people think, you know, one needs to lick here, move that. Maybe it will work, I don't know. I base my approach upon Jacobs' teachings – it's easier if you find a way to relate your playing to your thoughts – sound in your head. Trumpet is just an instrument, it's a tool, it doesn't determine the music – you decide how it will be. It's the same with the sound. If you give a guy who has his own sound four different trumpets to play, there might be slight differencies but the sound is determined by the humand, not by the object. Articulation, phrasings, it's all in the sound and it all stays with you.