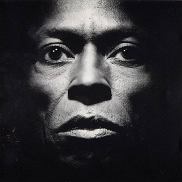 It's been 20 years since Miles' death and he's influence is maybe stronger than ever - his modal jazz music being copied as cited as the 'proper jazz', his pioneer electric work inspires young generations of musicians way after fusion ate its tail, among those a number of musicians assocaited with the avant-guarde and free jazz movements (most notably Wadada Leo Smith & Henry Kaiser band) although Davis never really aprreciated the ongoing revolution of free-jazz (he expressed his respect toward Coltrane, his old partner, but criticized Ornette Coleman on a number of occasions).
So it is quite ironic to certain extend that a pianoless quartet that is shaped clearly upon the ornettian model pays a tribute to Miles. But that's just an insignificant thought.

Piotr Wojtasik is one of a premier polish trumpet players, his playing modelled upon the likes of Freddie Hubbard and Woody Shaw, clear and crisp. Although I don't think he ever managed to attract more international recognition, he's talent was recognized by many foreign (most often american) musicians who would join his projects, most notably Billy Harper, Billy Hart and John Betsch. The quartet includes also the dynamic and powerfull saxophone player Adam Pierończyk (known for his late JazzWerskstatt releases), and a powerfull rhythm section in Michał Barański (on bass) and John Betsch.

Wojtasik is usually associated with the modern mainstream (for once I don't think any of the recordings he's made presents a pianoless group, although I do remember him playing a concert in a similar setting a couple of years ago) so his venture into the freer regions is bit surprising and more than welcomed. His compositions have a strong melodic theme, solemn line, wonderfully contrasted and underlined by the dynamic bass line and  overall groovy feeling. This melodic quality is what he shares with the Ornette Coleman's quartet, the straight head-solos-head format puts the music of this quartet somewhere on the line between the more traditional jazz, while the pianoless format allows for extended and risk-taking soloing and opens up the harmonic restrains.

Each player has at least one killer solo during the evening. There's the muscular and powerfull Pierończyk's tenor madness riding the freewheling rhythm section (he's playing is generally melodic, he patiently creates the momentum of his solos; I admit I care less for his melismatic lines on soprano for its thinner sound). The highlight of the evening is the beautifull ballad played in the middle of the set. A fragile melody played unisono (with occasional harmonic conterpoint) by the horns that breaks for an extended, melodic and subtle solo on bass, and what I thought was the best trumpet solo of the night. Lyrical but not sentimental or cliche, with open-minded attitude yet never losing the original melody from the sights and retaining the feelig of intimacy.
As for John Betsch he steals the show, there's the entire history of jazz and the entire heart of Africa in his druming, he rolls and breaks and drives and pushes the music constantly forward, never loosing the pulse or skipping the beat, he plays with such variety, with such flow that it is sort of a continous drum solo.

With the last track they honor Miles, but instead of choosing his own composition they choose Coltrane's "Miles Mode" - a piece where Davis modal conception, blues scale and Coltrane's 'sheet of sounds' meet, kind of foreseeing the revolution of Orneete's free jazz. Both ironic and meaningfull.

An evening filled with highly energetic and expressive jazz, driven by both the respect and passion and the skills set. I hope this band gets recorded as Wojtasik's compositions sound great within this pianoless quartet and it does show kind of a new side to his music.