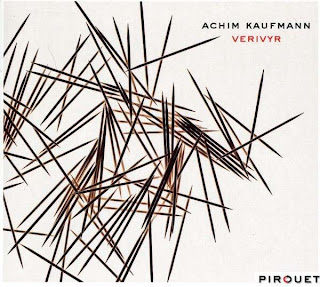 Regular readers might remember I'm not so keen on piano trio - probably the most classic instrumental outfit in jazz history - used to love it, than used to hate it, now I'm rediscovering this unit and it is thanks to music like this.
The cd starts with otherwordly sounds of bowed plates and harp-like notes of the piano strings. The piece than travels into a post-bop terrirory, with quirky and clever harmonies, chordings and runs intuitively supported by the precise bass work and drum's accents. And this is how this music goes on, suspended between the feeling of freedom and compositional discipline, openminded, highly intelligent and complex yet it manages to create or mantain the sense of natural wilderness, the flow of thought.

"Gatur I Christiania", a quirky waltzing theme, presents expressive interaction between the players in a series of explosive exchanges. "Bright Industrial Smile" starts with an uptempo progression and swings at ease, including the coincise drums solo. In fact both Achim;s cohorts shine troughout the album, Jim Black's ear for detail is uncanny and so is Valdi Kolli's precision and tone control (no need to cite any examples here, just pick any track on the album). And Achim Kaufmann's playing is extremely mature as he never goes for an easy show-offs but decides to dig deep into the melodies he created, leading the group subtly through the motions, playing with nuances of the rhythm and harmony (as in "Fada Verde" which is built on the rhythm variations of the same melody).
Which brings us to the key element (as far as I'm concerned) that makes this album - composition. Complexed, nuanced and varied yet allowing just enough freedom of expression to prevent any kind of predictability. This is a set of some of the most intelligent compositions in modern jazz that I've listened in a while. There's the fragile coda to the "Elephant and Boats", the hyperfusion of hard-bop and drum'n'bass in "Le Quadrimotor (Wols)", the slowly evolving theme of "Lonceng-Lonceng" which is trickily born from a world of echoe and silence, the pastoral "Farda Verde" or so "Berlin No Lights" that starts lushfully jazzy and ends wiith a funky twist. Not only Kaufmann's writing is a fruit of abundance of ideas and vivid immagination but also it's an intelligent act of balance. A rare achievement.
Heavily rooted in the post-bop tradition, yet open to a free-jazz kind of expression. Complex yet light, intelligent but not just for the sake of intellectual exercise. This is modern jazz how it should be and this cd deserves and rewards a serious listen.


Two tracks from the cd are presented in this playlist here.
unfortunately short excerpt from the trio's concert: