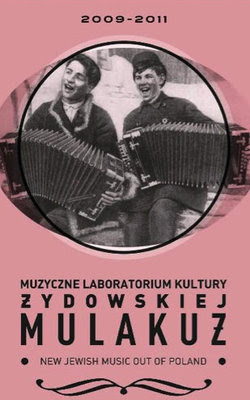 Just a quick post about a concert that took place last friday (I'm kind of busy with a new job but I hope to get back to more steady writing soon enough).  The concert took place in Cafe Cheder on Kazimierz, was a part of the MuLaKuŻ cycle (a musical laboratory of jewish culture), a double header for the special occasion which was a release of the cd compilation documenting the cycle.

1. Mazolewski Bund Band played an energetic set mixing traditional jewish melody with infectious fusion grooves. The biggest surprise - when Oskar Torok sits behind a second drums set and begins a long funk breaks feast with Dawid Fortuna. Joined by cosmic out of space sounds of keyboard solo by Pawel Kaczmarczyk, more free-jazz in vein soloing by Marek Pospieszalski and powerfull bass riffs (I love the fuzzy 80s effect) by Wojtek Mazolewski. The second number that stands out stars as hard rock piece (with guitar riff imitated on keyboard) and developes into another groovy exploration. Immagine  Herbie Hancock's Headhunters with a folk-jewish melody on the top. Surprising and entertaining.
Mazolewski Bund Band
Wojtek Mazolewski - electric bass
Marek Pospieszalski - tenor sax, basset horn
Oskar Torok - trumpet, drums
Pawel Kaczmarczyk - electric piano
Dawid Fortuna - drums
The first incarnation of the band had a different line-up, with Maciej Obara on sax, no keyobards and trumpet. The melodic base is similar but the overall sound and conception is completely different. Still, that's a nice clip so enjoy:
2. Żydowski Surf / Jewish Surf.
I wrote about this band on the occasion of their performance during Tzadik Festival in Poznan. Rock-tribal grooves, retro sound of main guitar playing jewish themes as if they were surf melodies and rock solid rhythm section. The playing was equally energetic, with mabe just a touch more of psychodelic, dark tones. The same material as in Poznan was played so you can read more about the group in the old post.
Żydowski Surf (Jewish Surf):
Raphael Rogiński - electric guitar
Bartek Tycinski - electric guitar
Macio Moretti - bass guitar
Ola Rzepka - drums
Cheder Cafe. Krakow. 02.12.2011
Some fragments from the concert in Poznan are available on YouTube. The registration doesn't do give justice to the sound dynamics and energy the band brings on stage but gives at least some idea of their music:
Autor: jazzowy alchemik o 5:27 PM