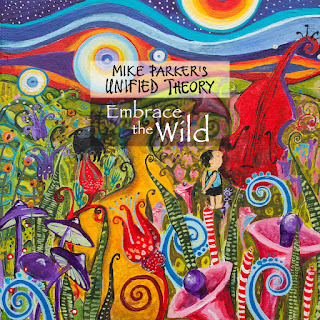 Mike Parker is a New Yorker who has been living in Krakow city for quite a while now and became a well-known and regular presence on jam sessions and variety of projects happening on the stages of city's few but active jazz clubs.

"Embrace The Wild" is the second release under "Unified Theory" name, but the first one recorded in Krakow and it finds Mike teaming up with some of the young talents of Krakow/Poland jazz scene, to play a set of compositions that balance diversity of styles with the harmony of beautifully crafted melodic layers.

Double Bass player usually hides somewhere in the back of the sound mix and stage. It takes discipline to be a bass player and lead the group. Now, this is a bass player's album, and bass stays often in the front, thankfully much in the way of Dave Holland or Charles Mingus, none of the flashy MM or SC stuff (you know who I mean). Mike Parker can keep the time in check with funky riffs and fill the bottom with the big sound or play the most melodic base in the 4 voice harmony, with trumpet and two saxes above. Parker's clearly well skilled on the instrument. But for me this is an album of Mike Parker - the composer.


Unified Theory unites a variety of influences - classical, rock, funk, hip hop, free jazz among them. You can find eight compositions on "Embrace The Wild". Hard driving, funky hard boppers like the kicker start "Kobra Kai Dance Remix", darker in tone "Hermit The Dog", or the energetic and crazy "Piwo i Bona" (possibly my favourite among them, with some wild tenor sax cries by Pezda). The cheerful and sunny song "Hopped.Up.Pop". The more majestic, solemn "Sendoff For Sendak" in which Prucnal's lyrical solo and Baszczynski clear's trumpet sound shine through.
The album ends with a three part "All Saints" cycle, dedicated respectively to Maurice Ravel (short, chamber - like intro), John Coltrane (spirited playing by Pezda digging deep into the modal harmony) and Miles Davis (soulful and uplifting trumpet solo by Baszczynski leads to positively beautiful harmonies at the end as the two saxes join in the improvisation).

I love the variety, the tasty riffs, the sweet harmonies, the downright catchiness of the melodies but what I possibly love the most about the compositions is how well the play into the musician's strenghts - (if you follow jazz concerts in Krakow) you know Fortuna loves and know how to groove, you know Pezda can go wild and how well Prucnal and Baszczynski sound together. I don't know whether Parker wrote all the pieces having these musicians in mind but it fits them like a glove. And they're having might fun playing it. And It's contagious.

This is finely balanced effort, with great compositions and playing throughout. It's not that wild as the title might suggest, but you shouldn't hesitate to embrace it. There's some great, colorful and creative music on it (which, btw, you can listen to on the band's bandcamp site).

PS. Speaking of colors, what do you think about the cover image? The artwork is by Agata Kotula.


PS2. This is the first cd review in a long while. With the upcoming coverage of Krakow Jewish Culture Festival I'm hoping to revive the blog and come back to more steady writing.