Aram Shelton Quartet - Everything for Somebody [Singlespeed] 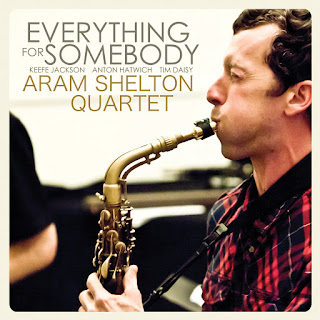 I remember Aram Shelton's two concerts in Krakow, first one with a Dragon 1976 trio, it was a release tour for the band's cd on polish Multikulti label and they have played with the polish "The Light" group which was the adience's introduction to Waclaw Zimpel. I remember that afterwards one of my very firsts texts was published by the Diapazon portal. The second performance I've seen was the Ton Trio, an evening of beatifull music. Aram Shelton made a lasting impression with his playing but even more so with the melodic compositions he presented. And he's still got a knack for the good melody.


"Anticipation" might very well be one of the best introductory pieces in a long time. It swings joyfully, the melody dances lightly on the bass groove notes and smiles warmly through its harmony. It's spirited, it invites you in and promises more, it engages the listener from the very first notes.
The Tim Daisy - Anton Hatwitch sections swings with a swag while the saxophones engage in their conversations. And the tenor alto matchup works quite brilliantly. The stereo realisation lets you savour the differences in the tone and approach to the solo narrations as well as the way the registers complete themselves in the harmony statements.
"Joints and Tendons" presents a more experimental approach to a composition. Notes are spare and seem disconnected, the long pauses are slowly shortened, and the elements presented before combine toward a melodic coda. "Barely Talking" has more dynamic edge and showcases the rhythm section again, heavy bass and busy drumming with the light hits on the plate just dancing around all the notes.
"Deadfall" opens with an alto interlude, light tone swirls through some harmonic cadenzas only to bring us toward an enchanting lyrical melody of the piece where the melody is passed between the instruments in harmonic sqeuence. The alto leaves the stage and the tenor takes for a lyrical solo that hints on darkness. As the alto comes back, the quartet creates possibly the most intense passage of the album, dark, menacing and intense, without really having to hit the notes high or loud. They release the crescendo and fall back again to the enchanting piece's harmony.
"Fleeting" ends the cd as it started, joyfull, swinging with a panache. The bass walks happily, the drums syncopate nonchalantly and the alto (first solo) and tenor (second solo) ride the groove. The concise and hip drum solo is there to make the final point.

This cd in many ways brings back the history of jazz music. And it revives it. And it pushes to the tradition forward in a brilliant way.
For its great melodies, for its swing and swagger, for the brilliant  solos it deserves as much attention as any "out there" avant music. Could provide a point of mutual understanding between "mainstream" and "free" die-hard fans. And let us hope it doesn't get lost in the midst of this "sacred war". Would be a shame as it is absolutelly fantastic portion of Jazz.