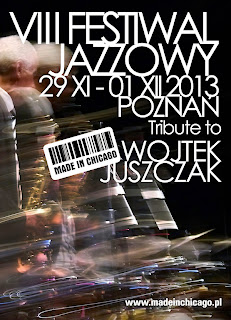 First part is a composition of Mwata, under his conduction. A glimpse into the jazz history which begins with a laidback funky groove, big band choruses, charming melody delivered by Dee Alexander and Nicole Mitchell and plenty of gritty soloing all around - delightufll flute, explosive vocalese, Brown's deep and soulful sax tone or more rapid and sharp Francis Wong and some New Orlean funky trumpet. Leon Q Allen deserves in fact his a special mention - he has considerably chops, comes a bit unfledged at times, but his enthusiasm is contagious. He's true showman - when he's not dancing, he's making a badass face (mind you, he's a bit of a teddy-bear posture).


The idyll is cut by a moaning, elegiac cello solo (a'capella) by Tomeka Reid, after which the orchestra puzzles with some more abstract figures. The next one is a true killer - Junius Paul makes the bass sing with ultra-fast singers, amazing melody, groove and phrasing which marries blues and funk. Right after a dreamy piano interlude follows, the music becomes more heated with the addition of Ari Brown's tenor. With that duo a bluesy, midnight jam feeling returns, right until the band on stage is joined by Tatsu Aoki and Kioto Aoki on traditional asian instruments. Wasn't jazz music born on such intercultural crossing a while ago?

The second part is a voyage to Asia (just for the sake of precision - Junius Paul, Ernie Adams and Scott Hesse leave the stage, Tatsu grabs the bass, Kioto Aoki stands behind the taiko drums,  Avreeayl Ra sits behind the drumset). The piece composed by Tatsu has strong oriental features - the melodies are distinctly rhythmic, with a bit of a marching or fanfare feel. Plenty of good soloing (Tatsu makes the bass sings like a bird's choir) and Mwata conducts some interesting duos as well (flute - trumpet possibly one of the most rewarding).

Last but not least the orchestra performs a final part of the Nicole Mitchell's "Harambee" suite, premiered in its entirety few years back in Poznan. "Harambee" means in suahili "bringing together" and the piece brings back on the stage Scott, Junius and Ernie, Tatsu takes the traditional shamizen, Harrison Bankehad switches to bass, Mwata Bowden, relieved of his conducing duty takes baritone sax. After a short impressionistic interlude a fat beat starts the joyfull tune. It transforms into an african-like sunny chant and ends as a classic gospel song. That's a joy of "bringing together".

Great band and some might music. There were moments of sadness and elegiac reflection, but most of all this music was filled with joy, warmth, hope and kindness. I had not had the privilege to meet Wojtek Juszczak in person, but that's exactly the portrait of him that comes across the stories of him I've heard. I think it was a perfect musical way to honor his memory. I'm pretty sure he was dancing somewhere up listening to the music.