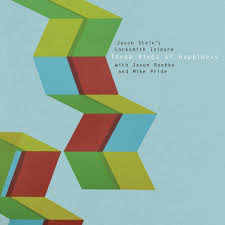 Locksmith Isidore - Three Kinds of Happiness
Jason Stein - bass clarinet
Jason Roebke - double bass
Mike Pride - drums
Not Two 2010
I had already in mind couple of other recent cds I wanted to review but couldn't really decide to pick one so something really fresh and new took over.
Locksmith Isidore is a trio led by Jason Stein on bass clarinet, with Jason Roebke on bass and Mike Pride on drums. While many reeds players do play bass clarinet on regular basis and to great effects (David Murray, Ken Vandermark, Mikolaj Trzaska, Gebhard Ullmann, Waclaw Zimpel the ones that would come to my mind first) Jason Stein is the only one I can think of who plays exclusively on this instrument. Thus this recording is focused very strongly on the sound capabilities of the lead instrument, so rarely heard in this role in a reed-bass-drums trio setting. And that is, to begin with, obviously an upside to those who like the sound of this horn as much as I do.
Previous recordings (2 by the trio and 1 solo recording by Jason) would emphasize the various approaches to free-jazz interplay and spontaneous improvisation this one is based very clearly on compositions. And while 'free' is never far away, it's very much, as stated also by Jason (cited in extensive liner notes by Art Lange) a jazz recording, or, to be more precise, bass clarinet jazz recording.
The soloing is tonally loose, but very melodic, and soulful, Jason's sound enriched by a lot of overtones, very round, elegant and 'airy' at times, but he's not afraid of more raw, crying or distorted, or otherwise „expanded” sound while improvising. Themes are very clearly stated, and chord structures very apparent, especially in the great bass walking-lines by Jason Roebke. Some of the numbers are very free-boppish, with fast, syncopated and swinging brushwork by Mike Pride (Crayons For Sammy; Man or Ray that includes a powerfull drum solo), some lightly swinging ballads (Little Bird; Ground Floor South) and there's also a great blues piece (More Gone Door Gone with faboulous circling lines by Jason).
It's very much „reappropration of jazz heritage” (once again words by Jason Stein) and the biggest influence traceable would be the man who introduced bass clarinet to jazz music – Eric Dolphy, with his trademark interval and rhythmic jumps (Straight Up And Down comes to mind as a good example) echoed in both composed themes and the soloing (and the bluesy tone) by Jason. Archie Shepp is honored in the Arch and Ship with some wilder playing and more extensive sound explorations (but, more or less in the middle, also this piece gets into the swinging groove). Miss Izzy, which listed as a bonus track, as it comes from live recording in Alchemia, is definitely played more 'free', the sound is also much more 'direct' and 'in front' as the concert recording should be, it shows bit different face of the music played by trio (great playing by Roebke again, deep woody tone and a fine solo on this one) . Jason with great groove and Mike with very modest and elegant yet highly efficient playing make for an extremely good rhythm section.
The music on this cd is not groundbreaking in any sense, nor it's trying to be, It's personal take on jazz history, with great themes and arrangements (intro to Ground Floor South; contrasting fast and slow phrases in Man or Ray), faboulous musicianship displayed, great soloing and whole lot of swinging drive with a highly contagious foot-tap factor. Fun, relaxing, joyful and very enjoyable.
Art Lange in his liner notes does a great job on decoding the name of album and compositions' titles, indicating references to experiences from composer's personal past or some musical ones. I don't know much about three kinds of happiness but this cd keeps me happy for approximately 1 hour each time I put it into the cd-player.
Locksmith Isidore live playing "Cash, Couch and Camper" (sound quality bit shaky)
great bass clarinet solo by Eric Dolphy with Mingus group
Additional notes:
-yesterday birthday of Paul Desmond and Nat Adderley :)
-since Not Two is based in Krakow I'm very much able to keep track of their new releases on a very constant basis, definitely not the case with all the other labels I appreciate, so it is very probable that new Not Two releases will appear in this section (much) more often that the others although I will try to variate as much as possible.
Autor: jazzowy alchemik o 8:10 PM