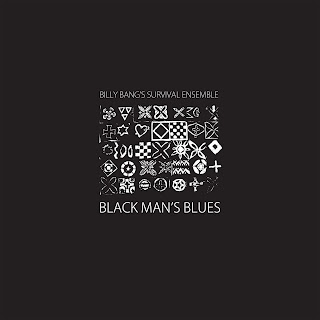 Black Man's Blues:
Billy Bang - violin, poetry, bells, shaker, percussion
Bilal Abdur Rahman - tenor and soprano sax, bull horn, percussion
William Parker - bass
Rashid Bakr - drums
Recorded 29th May 1977 at a Day in Solidarity with Soweto. Released for the first time.
New York Collage:
all of the above and
Henry Warner - alto sax, bells, shaker, percussion
Khuwana Fuller - conga
Recorded at Columbia University Radio WKCR 89.9FM at 16th May 1978. Released originally on Anima Records in 1978.
A double treat from NoBusiness Records! An uncovered treasure that puts some light on the few rather obscure chapters of  the loft jazz era, combining new material and a re-issue of a lost gem of the New York avantgarde jazz scene in what would, unfortunately, become a post-mortem tribute to Billy Bang who died on April 11 this year, stripped of the chance to see this release being finished.
As much as these 2 cds (or lps)' serve as a tribute and an important document of the freejazz history, the music itself, as played originally in 1977 and 1978, transcended the art reality, was a gesture of a social protest, a political demonstration, an ideology manifest - to start with the very name of the band - Survival.
Survival in the post-Vietnam reality of social and racial injustice, post-war trauma (Billy Band was a war veteran) and everyday struggle of making a living being a musician in the New York scene that seemed to appreciate more the visiting artists that the New Yorkers. The survial that translated itself both into political radicalism and radical music.
"The Black Man's Blues" session was recorded during a fund raiser "Day in Solidarity with Soweto - Harlem Fight-Back" and it presents a trimmed down to a quartet version of the ensemble. Raw, passsionate, energetic, vulcanic - this music displays true fire of passion, fierce in spirit, strong in mind. With all the musicians playing percussion it's hard not to think about Art Ensemble of Chicago yet Bang's states it was a "Bronx thing" (all members of the band had a similar background in that sense) - I can't tell really  tell but the feel of unity within the band is so clear that it supports easily this theory.
Bang's sound is raw and dirty, clearly rooted in folk music or rural blues. William Parker is already his usual master of deep sound and slow groove. The obscure Bilal Abdur Rahman is possible the biggest surprise, his playing is sharp and vibrant, building on his ancestors - John Coltrane and Albert Ayler. Rashid Bakr (bit low in the mix) keeps the grooves light and swinging with his poli-rhythmic dances. While the monumental half-hour "Ganges / Enchantment / Tapestry " is the highlight of the concert (with some real strings shredding by both Billy and William) the entire album is just smokin' hot, "Black Man's Blues" goes positively mad over the steady bass riff (some fiery violin-sax exchanges there) and even the passionately delivered poetry adds oil to this mix.
"New York Collage" presents a full sextet in a peak form. With richer pallet of sounds the interplay and communication is even more complex yet spontaneous. The studio allowed for a better , clearer execution of the composed part, the sound is crisp and crystal clear, the time limits of the lp made for a very focused and cohesive takes (while keeping them relatively short - meaning shorter that on the concert album). "Illustration" let me down a bit as it is in fact a 8-minute reading of a poem with music accompaniament but the three remaining tracks live up to the expectations set by the first part of this double-header, with the final track "Subhanallah" bringing in a particular excitement, a very strong momentum and fitting coda to the album.
No doubt it's fantastic to have this album back, yet the concert release convinces me a bit more (at least for now).
While the social and political message of this music remains way in the past, it's emotional impact, it's universal power is not lessened with time. I can't help but think many of Peter Brotzmann's interviews in which he talks  (with a gentle-bitter smile) about  how he and the other artists of his time believed the music could make a change, and how those beliefs seem foolish and naive right now. For the music can't really change the world, but it can uplift the spirit and be the expression of freedom and willigness to fight for survival. And this music does so.
I featured two tracks from the cd on this playlist.


PS.
The release includes a 40-page booklet that contains a comprehensive and enlightning essay by Ed Hazell - a result of a profound research, deep and sharp insight into the life of Billy Bang and the story behind the creation of this music, adorned with numerous quotes from the musician's involved as well as reproductions of original posters, flyers etc.
Billy Bang died before this project was finalized, yet with his personal involvement in the process of preparing this double cd (or double LP)  he made it his final statement.
Billy Bang (born William Vincent Walker; September 20, 1947 – April 11, 2011)