Ivo Perelman Quartet - The Hour of the Star [Leo] 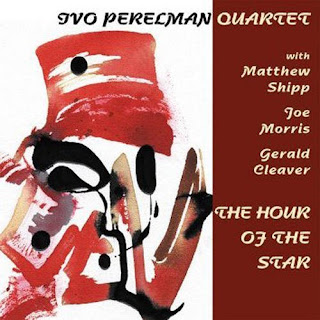 Ivo Perelman - tenor sax
Matthew Shipp - piano
Joe Morris - double bass
Gerald Cleaver - drums
Leo Records 2011
While I've been recently introduced to some very intriguing new names and it proves how active and vivid is the modern improvised scene, it's the sustained level of excellency that we are able to witness release after a release (or, if we're partcularly lucky, concert after concert) that gives this kind of music its artistic validity. And that's the case of Ivo Perelman and his companions here.
All those musicians have enjoed playing with one another in different constellations (Shipp and Perelman duo, Morris plays bass with Shipp's trio, Cleaver recorded extensively with Shipp's Quartet) yet this cd records their first meeting as a quartet together.
Two of the tracks are actually played by the pianoless trio here. "Singing the blue" is a laid back blues, Perelman playing with a loose feeling and almost ironic swagger, bit rough, rusty tone here, while Joe and Gerald are providing a lightly walking backup. "As for the future" is more intense, with speedy ostinato lines on the bass, accented by the light and agile drumming to bring forward the Perelman's sax running up and under the scales with an adventorous solo.
The remaining four tracks bring an entirely different dimension to the music with Matthew Shipp adding his powerfull, roughly hewn chord progressions, that seem like massive and monumental columns thanks to which Ivo can hit through the ceiling with his playing. The title track is the highlight of the album for me, with its slowly built dramaturgic momentum and the  exalted melody, like that of a spiritual hymn and  playing that is so full of fire and primal energy that it's almost exhausting (reminding me of a great "Godspelized" album by David S. Ware). Perelman's playing is passionate and explosive, posessed really with an incentive power. "Whistling in the dark wind" shows also his more melodic side of the nature, yet this piece too evolves slowly, gathering speed till it sustains a couple-minutes long deconstructive fury filled with shrieks, wailing cries and rapacious intensity.
The chemistry present in this group is astounding, Cleaver's light timekeeping fitting closely with the Perelman's saxophone attacks which strength comes not from the brutal force of the muscles but rather the speed and ability of chosing the right moments to do so. Morris busy fingering serves great as a bridge of communication between the Gerald's drumming (it's great to hear just those two playing in the opening "A tearful tale") and Shipp's piano who adds the substance, the raw meat.
An excellent album. Music that is powerfull with it energetic, emotional and intellectual impact. Absolutely stellar and highly recommended.
ps. The title of the album refers to a novel written by Clarice Lispector as do the last four albums released by Ivo ("The Apple in the Dark" duo with Gerry Hemingway, "The Stream of Life" with Brian Willson, "Near the Wild Heart" with Dominic Duval and Rosie Hertlein and "Soulstorm" with Daniel Levin and Torbjorn Zetterberg). I can easily recommend each part of this cycle.