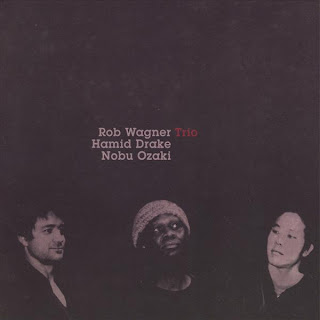 It's almost too easy to focus on Chicago and New York when thinking about jazz music "made in USA". In which case this album serves as a good reminder of a place called New Orleans, so crucial to the jazz history, so painfully experienced in the last years. Recorded December 2005, shortly after the Katrina,  this album's story is much more about the place and the people who create it than your regular comfy studio session.

Obviously Hamid Drake's name on the cover catches the eye of your regular listener as he joins Rob Wagner and Nobu Ozaki (invited by the label's owner Benjamin Lyons in his quest to present New Orleans improvised music scene), but make no mistake this is Rob Wagner's group and he has composed all but one pieces of the album (the exception being an ensemble composed piece).
This music is exceptionally melodic, sincere and yet free in mind and in spirit. Whether it's the soft ballad "Plutino", or the waltzing "Childhood Memory" that starts simple and joyfull and goes positively crazy as in a children game. Rob Wanger's lead voice is clear and powerfull, strong and emotional, warm tone with just the perfect support from the Hamid Drake (elegant, lightly swinging, grooving, vibrant, you name it) and Nobu Ozaki, originally a drummer too so he's keen fingers to support the groove while keeping the melodic base. The anger, the dissapointment shows up in the titles like "Desoparia (They handed out $ 12 billion cash in Iraq and couldn't even give New Orleans drinking water" or "Freedumb (Aren't you glad to vote in America?" with its somehow ominous groove.
Yet there's much more to this music than just bitter regrets, it also brings hope, it brings the joy of playing music, joy of exploring various musical cultures and possibilites (middle-eastern flavour of the "Desoparia", general ethnic feeling of the "Where is Home?" that pairs tribal rhythms of the frame drum with slow hypnotic clarinet dance - some klezmer-influenced phrasing here to be noticed).
A splendid trio with right balance and vision and musicality. Not only for collector's of Hamid Drake's releases but generally very recommended.

I featured two tracks from the cd on this playlist.
you can listen to some samples and buy it if you follow the links on the trio's page here.