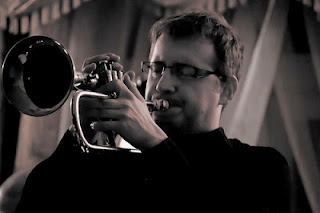 As piano trio is probably the most common instrumental line-up in jazz, sax trio being it's freer equivalent, it's dissapointing there are so few trumpet trios - as it seemingly should be a natural thing to do. Rare as they are, they often bring some great music which is why I was so curious about Maciej Fortuna's concert - part of the Starzy i Mlodzi Festival. The trio displays a nice chemistry. The playing is definitely on the main side of the stream, yet dense, fit and far from any cliche'. The compositions are melodic, the solos are fun and pleasure (Piotr Lemanczyk steals the show with his light and gracefull walkings) and some passages suggest also more open, sonorus forms of exploration.    Groove, swing, melody - as jazz and as cool as can be. If you're looking for a trumpet trio and that's easily enjoyable new cd "Solar Ring" by the trio could easily satisfy your needs.
(The only thing I'm trying to forget is 100000th version of "Autumn Leaves" they played as the encore, why not stick to the originals? Maciej and Piotr's compositions were really good) 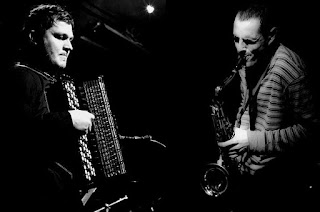 I got late to Bomba but I still got abouth 30 minutes part of the continous over 1 hour long duo's performance. Paweł Postaremczak appears quite often on the blog and his prowess should be known to any fan of adventurous jazz thanks to Hera's albums. It was Robert Kusiołek's playing who intrigued me the most, since it was one of the firts times I got to see him live, and the pairing of sax and accordion seemed to me very risky to begin with. Robert brings space, Paweł brings direction, together they create a rich and varied landscape of sounds, a musical story, narration without words, combining two distant sonic worlds - accordion bringing the echoes of tango, french chanson, eastern european folk, film noir music while the saxophone brings to the mix the scene the tradition of John Coltrane, but also the serial music by likes of Philip Glass and Steve Reich. In fact, inspired by accordion's sound Paweł creates some of the most classically beautiful arco lines I evere heard him did. Immaginative, sensible and adventurous minds.