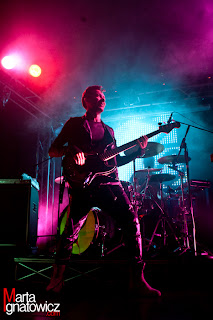 Pink Freud is an example of a band that manages to exist on the fringes of jazz, alternative rock, electronics. Started as a trio a couple of years back, only the band's leader - Wojtek Mazolewski, remains from the original line-up but the group is coming back strong with another album - Horse and Power, and the concert in Krakow was part of the promotional tour. 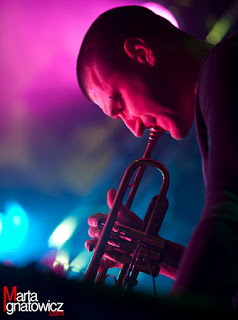 Heavy riffs, great interplay, dense structrues and instante energy kick - Pink Freud plays music that alternates swiftly between hard rock anarchy blowouts and nu-jazz ballads, spacious, hypnotic walks on the Milk Way. So there's not much new about the band, at least not for anyone who has heard and seen them before. Still the new material is strong (Mazolewski has great touch for catchy choruses, funky lines, heavy riffs and pretty harmonies) and the band is rocking hard (rock workouts) and tripping smoothly (hypnotic ballads - could be very well done within the same piece). 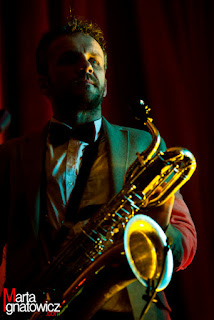 Wojtek Mazolewski is a carismatic leader, jumps and runs the stage (his bass sounds great, check below). I miss Kuba Staruszkiewicz on drums (part of the original line-up) but Rafał Klimczuk's heavy kick and fast hands make up plenty for his absence. I've been told he used to play dubstep and drum'n'bass and his lightning-fast hi-hat patterns fit perfectly te dense bass lines. Tomasz Duda adds deep and brassy note on the bari, he's also keen on crazy atonal cries during solos. And Adam Baron trumpet flights are accompanied by live electronics manipulations from the outer space, he simply killed on the encores with sharp, fuzzed cutting-edge trumpet solo. 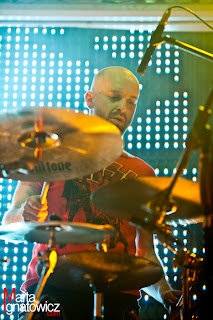