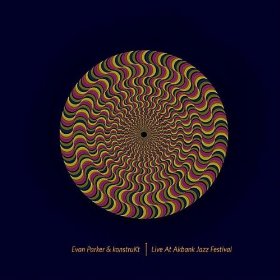 Konstrukt is an Istanbul based improv group and last year they've documented on cds three collaborations with giants of saxophone (Marshall Allen, Peter Brotzmann and Evan Parker). All three of which are of interest to followers  of free music and this one is my favourite of the bunch.

The cd starts with two soprano saxophone solo improvisations by Evan and his singular vision  is instantly recognizable. He makes the notes flow from the horn, fluent stream of consciousness, linear variations, figures of constant repetition, retrospection, reinvention. To listen to it is like watching the reflections of sunlight upon stream of water, or like seeing the dna code unveil in front of your eyes. Infinite patterns, a microsmos of possibilites. A mesmerizing path of constant flow of ideas (or is it just one idea, still the same, put through filter of all the possible variables? - the perception of continuity is reinforced by the use of circular-breathing technique). It's awe-inspiring, truly a great example of Parker's solo work.

After this 25mins worth of intro you're in for two extended group improvisations (both just above 20 mins long). Two drummers provide a dense web of rhythms and pulses, two saprono saxophones swirl around each other in frenetic flies and guitar fills the space in between with dark shapes of noises, reverberating, echoing in the air. Couple of minutes in, after an energetic sax - drums duo, the band kicks for a ride with all three lead voices symmetrically in a frenetic tri-alogue, there's hint of swing once, there's some rock kick, there's the instant energy of pure abandonement. They immerse fully in the moment, loose themeselves in the contagious pulse, and still there are more than clear echoes of jazz tradition in this music. The drums' syncopation, the chord-phrasing of the guitar solo. They kick it up a notch once again near the end of the piece, as Evan puts off the hat another linear sonic-labirynth, the saxophones ride the crazy percussion grooves like two madmen with no regard for their life.
The second improvs starts with a minimalistic mirage of electronic effects, feedbacks, noisy ticks and clicks on the guitar. Soon to be joined and pushed into more extrovertic regions of expression as the drums start a storm that after a while sets off again for the two-piece saxophone frontline for their unhurried research of dual-tones, or dual-lines. No point in going further into details.

The band is really in a top form, powerfull, fiery, energetic and uncompromised group improvising with the drum fever setting the tone. It's dense like a jungle in here. It's wild. It's risky and adventurous. It's colourfull. In short, it's a treat for all avant-guarde ears around. Enjoy loudly!