Another set of solo cds, a true classic of the genre, an impressive statement that retained its power over the years, and a ultra post-modern try that extends the idea of solo performance in quite an unique way 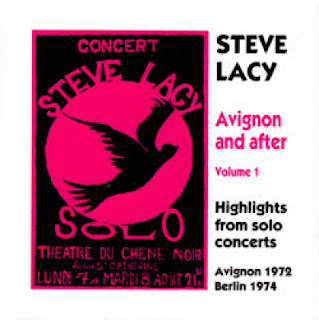 Soprano Saxophone solos in Avignon and after - vol. 1

Once you think about jazz solo performances it's impossbile to forget about Steve Lacy's input to the genre. This release not only brings back the previously available classic performance from Avignon in  1972 (lp "Weal  & Woe") but completes it with half-of-cd worth of previously unreleased material (part of it coming from the same concert(s), the other one from Berlin 1974).

Lacy's sense of adventure reaches far into regions of avant-guarde but is born clearly from the jazz heritage of thelonious monk, an influence so clearly heard in the quirkiness of Lacy's tunes. He introduce the themes carefully and respectfully but then delves and dives deep and far searching for impossible sound and melody combinations, squeezing notes you'd hardly thought possible, raw, inaudible, improbable. There's poetic restraint to some of the passages as much as joyfull madness to the others. One way or another, this is a must-have set to fans of Lacy and/or solo saxophone music and is a valuable entrance into any collection of improvised music. 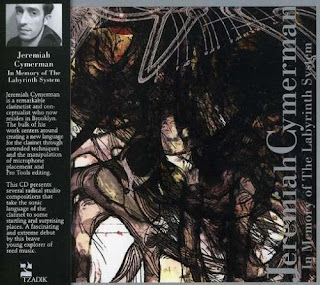 In Memory of The Labyrinth System

Not a recent release but worthy of searching. Jeremiah Cymerman operates on the verge electro-acoustic music both improvised and composed (for that see the review of his cd "Under a Blue Grey Sky").

"In Memory of the Labirynth" is Jeremiah's trying to create musis as personal as possbile, using his exclusively the array of extended techniques he developed as the performer and sound engineer. working with vloops and micro-edits Jeremiah creates a multi-webbed multi-faceted sonic realities that, being so unique, escape any real comparison, evaluations and description. Drones, shrieks, taps, delays, feedbacks, micro modulations, infinite repetitions, microtones, microsounds all crashing together at once is sequences, ad hoc systems of the labirynth. This is reality that is so heavily edited that it barely resembles anything one might know from any other experience. It's, frankly, a bit terrifying, to journey into this complete unknown, without anything to hold to, but it's also an exciting joureny, if still a very weird one (weird is fitting word). The mad experiences finishes with the total insanity of "Ending of nerve in recessus ultriculi" where fluttering line, with the apparent modulation being an effect of a different mike, is repeated and multiplied (around 15.000 lines on the track) up to the point it becomes a pure undistinguishable digital noise. Definitely weird. Good weird stuff.

some tracks (both albums) are available on this playlist.