Kris Wanders Outfit - In Remembrance of the Human Race 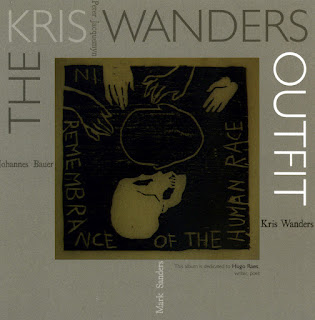 Take Kris Wanders who bends the saxophone notes every possible wa, consequently squeezing every ounce of furious sonic frictions with tons of distortion and vibrato, he's furious, his playing is almost pure instinct. Unstoppable power of nature.
Against the tenor's sound, Bauer's steadier trombone counterpoint seem at times a witty commentary of a court's clown (jovial, panpharic tone, joyfull rubato) while at others is like a discourse of a wiseman trying to balance the impulsivity of a youngster. Add to that the muscular bass by Jacquemyn (just primal energy, whether he's sawing the strings with passion, or strucking them with all his might) and Mark Sanders for some tribal, powefull drumming (with all his attention to the colour and tone). You have in one place and time four musicians, each a strongl individual voice on the relative instrument and you're in for a ride. Two close half-hour journeys of heroic intensity (title track and "Uwaga"), and a "short" encore trip (just 13 mins "A Man's Dreams").

No need to (try to) tell the twists and turns of the ride. Although any sort of description wouldn't be really any spoiler, would it? They go for it. It's intense. It's wild. It's ferocious. Mostly dark. And still will surprise you here and there with some off the hat enigmatic sound-plays, or jovial (hint of) melody. They keep you well on your toes throughout. (Just one spoiler maybe - the sax solo in the latter half of the "Uwaga" is just killing, tenor's on fire).
It's a raw and juicy free-jazz heavy stake. No salad. If you're up for this kind of meal, this one is just what you're looking for. Comes with chef's recommendation.

ps. the album title refers to a short story by Hugo Raes (one of the major dutch writers of 20th centyry) to whom the album is dedicated.
Autor: jazzowy alchemik o 7:43 PM