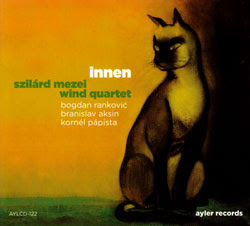 Szilard Mezei has been tremendously active in recent years, dividing his time between small ensembles, and large groups (among his bands' most recent releases you will find a trio and a 10-piece orchestra on Not Two, Szabad Quartet on NoBusiness, an octet on Slam Productions, plus two solo albums). Not only he's a terrific performer and improviser on an instrument that's rarely to be found in jazz music, nonetheless it yelds tremendous expressive possiblities, but he's composing (whether for a trio or the orchestra) gives an unique,  personal stamp to the music as he's draws inspiration from modern improvised music, jazz, folk melodies and both historic and avant-guarde strategies of (for lack of a better term) classical music.
Wind Quartet attracts attention with quite an unusal instrumentation, the quartet not only extends the scale downwards and upwards (the way a string quartet or a saxophone quartet would) but offers an entire palette of colours. So there's the viola that can be sweet and tender but also passionate and gypsy-like raw, there's the vivid voice of the saxophone, the classy and elegant clarinet (I immagine a gentleman in smoking, you get to see a chubby and a slim version), the roaring trombone and finally the joyfully robust tuba. I love tuba -  the marching brass bands, the entire aura of the feast that goes with it, although one should look more into the direction of balkan brass band for roots of this ensemble's sound.


The first half of the cd resolves around the folk core. The title track is a sad, deeply lyrical ballad, with almost painfully fragile and full of beaty main melody that is passed from the viola to the bass clarinet, to the trombone. The  "Impossible Variations on Solutions" (I'll use just the english versions of the titles) that begins the cd starts off a simple rhythmic motive that is carried on by tuba, a platform for some fiery solo exchanges. "Big Cat" starts with an orchestrated dissonance that makes the leitmotif of the piece, a returning intermezzo between the set of solos (all four of them digging deep, still Mezil's passionate bow-shredding takes the prize, not only because his instrument's sound stands out so clearly in the mix).
"Trio Improvisation" shifts slowly throught misty moods and sort of cuts the disc in half. "Hep 15 K" mix together the folk interludes and modern mini-orchestrations and mini-improv games (there's this little bit of playfull showmanship, not unlike the panache of a folk musician who tries to impress the crowd, as they explore the possibilities of their instruments). One of the qualities of Mezei's writing - as  he shakes  the rhythmic and timbral accents - is that he makes the quartet sound at times like a group twice or thrice as big. The heavily modern "Hep 15 R" and the light and serene"Old Dance" complete the set.

For those who know and appreciate the style of Szilard Mezei's composed music - this is another strongly composed set that goes easily recommended. For those who don't know him it might be a great place to start as, while just a quartet, it does give more than a glimpse off his orchestral ambitions. And the material is brilliantly executed, with strong soloing throughout the entire album.
The only downside of the album for me is it's length, in fact I'm impressed they managed to squeeze 76 minutes 23 seconds on one cd. It's quite overwhelming to listen to the entire thing at once and the album's cohesive overall sound can become heavy on the ear and wear the listener down. I strongly feel this release could benefit from some editing (although, on the other hand, I wouldn't know what to cut and I understand the artist's will to document all of the compositions). So maybe the best way to listen to it is just to savour this music in halfs (a dilemma that is not new to Mezei's listeners - "Bot", a double-cd release on Not Two records brought together a 160 minutes of  orchestral music). Nonetheless, it goes recommended  for its unique blend of folk, jazz and classical.