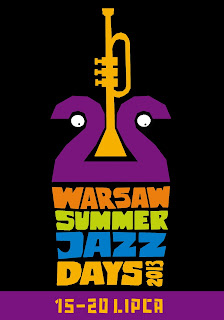 The last "big event" day of the festival presented at Soho Factory three radically diffrent groups and visions of jazz.
I admit I missed most of the Andrea Marcelli Trio performance, as it's definitely not my sort of jazz - too light, too smooth, too pleasant. Music that would fit into a small club, as you're having beer and conversation with friends, not apt for a big festival scene.

As for Antonio Sanchez Quartet who finished the night - it was a solid post-bop, some sparks flew especially during the David Binney - Antonio Sanchez duo. But, having still in mind the beatifull Wayne Shorter Quartet and talented Maciej Obara International Quartet, the concert's impact was substantially diminished.

Inbetween the two performances played Jerzy Mazzoll, in the company of three young associates and one veteran of  contemporary music Zdzislaw Piernik - a virtuoso tuba player, musician chosen by Krzysztof Penderecki, Boguslaw Schaefer and many others to perform their original pieces, responsible for introducing to the tuba repertoire new techniques and original preparations of the instrument.


Mazzoll's deep and vibrant bass clarinet tones can mesmerize with the variety of shades within a single note. Zdzislaw Piernik's attack on the tuba can make the whole building tremble. A match made in heaven. The music would constantly change its form and shape. Deep, resonant, long low tones, spare notes, huge dynamic fluctuations and constant attention do sound's texture. Poignantly emphasized by vibrato guitar and minimal drumset.  The music filled equally with majestic tone and vitality.
Beside the continous appreciation of the leader and guest's attention to the tone I marvelled at the young Tomasz Sroczynski's playing - filled with dense, sharp, almost primitive textures, bursting with inner tension.
Music's played by the Mazzoll's group is a reinterpretatin of once-rebellious Stravinsky's "Rite of Springs". I kind of think that after the easy-going music of Andrea Marcelli, Mazzoll's group performance must have seemed as revelatory and possibly outrageous as Stravinky's piece was a hundred years ago to the concert hall audiences. Constantly intriguning, the most surprising concert of the Festiwal.


Jerzy Mazzoll - bass clarinet, clarinet
Zdzislaw Piernik - tuba
Tomasz Sroczynski - violin, electronics
I'm afraid I did not catch the name of the guitarist and the drummer, I hope to fill the blanks soon.