It would be hard to immagine the modern polish scene without Raphael Roginski and the entire plethora of his projects, idealized to bring back jewish culture, modern and vital, to a country where it used to thrive and where it disappeared completely after the tragedy of World War II. Roginski's vision of jewish music is modern and rebellious and Cukunft is the perfect vehicle to make it a reality - powerfull, tribal drumming, poignant guitar tones and absolutely furious clarinets chasing one another - that's Cukunft, in short. 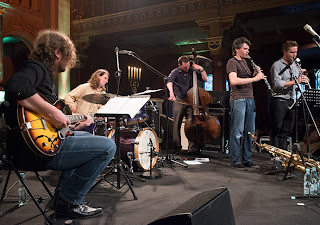 For the concert at the festival Cukunft (expanded to a quintet with Piotr Domagalski on bass) invited a Ramanian vocalist Maria Raducanu, to sing with them. We are children of the borderline, said Festival's director Janusz Makuch, introducing the performance. And that's where the meetings happen, and where cultures influence each other, and we all can appreciate our differences, and be surprised of how much in common we have.


You could weave a line connecting all folk music cultures, Roginski connects the dots in a way that startles you initially, that it startles you how obvious the connection was.

Maria Raducanu sang in romanian, but language is of little importance when it comes to expressing the emotions and her singing, screaming, whispering explored the whole emotional range.
The connection with Cukunft was instantenous, the songs of passion and freedom, scary, funny, uninhibited. Try to combine circus fantasia, punk energy, childish playfulness, hypnotic rhythms, neck-breaking tempos and a (big) hint of crazy.
The things got even wilder a couple of hours later  during the Jam Session in Alchemia, where the same stories seemed to be fueled with enough energy to lift the musicians off the ground. 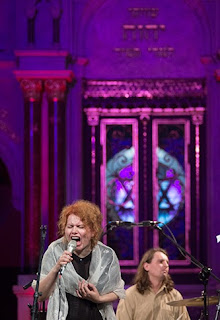 Impressed as I was with the performance I asked Maria for a short interview. As wild as she is on the stage, she speaks gently and with a soothing, sweet voice, gracefully declining each of my attempts to pinpoint her music. I'll try to post the whole conversation soon, but one phrase stuck in my memory, when I asked about how he felt during the concert:
"I was truly happy. Which is actually quite rare"
and when I followed up to check If this collaboration will continue
"We would all be idiots if it don't."

This festival had many incredible moments, I believe music played Cukunft and sung by Maria Raducanu delivered some of the most memorable ones. 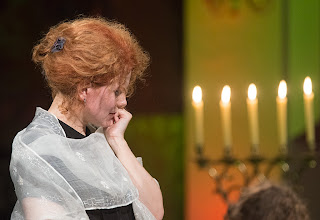