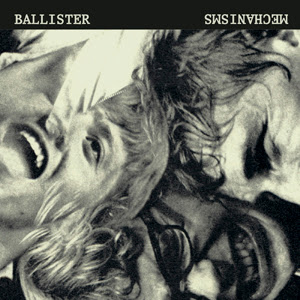 You know these players, right? Good. No introduction is needed then. This trio doesn't take time to warm up either.

"Mechanisms" is a live recording from the Hideout, Chicago. "Release Levers" launches the cd with a full audio onslaught, the trio literally ripping the air. Ferocious sax is slashing the air with the cascading notes, distorted cello and electronic noises wrinkles them around and relentless drumming pushes all of it onward.

Which is not say "Mechanisms" is all raw energy, noise and explosions. There are some quieter passages, touches of minimal, mysterious and subtle (like the spare drums solo in the "Caplock" that begins with plates echoing in the silence and slowly develops into a short storm). Those are not moments of mellow but of tension as the trio is regrouping itself to prepare for the next blast. "Roller Nuts" is the half-hour finale that rocks the house with hendrixesque cello riffs, massive baritone shouts and hard hitting on the drums.
The predatory nature of Ballister (a crossbow) manifests itself in the lightness and agility of the moves combined with the sheer power of the punch they throw. The raw, incendiary energy of the trio wouldn't be this impressive if not for the feeling of coherence and direction present throughout the set. The trio manages to keep the tension through a dazzling and exhausting series of decrescendo-crescendo, as they burn together, they rise again, a phoenix born from the ashes.

This is one of the CDs that should come with the label warnings "not for the faint of heart" as well as prescriptions "volume up".
There's a joke about a Pole in England trying to order a raw meat at the restaurant: "can I have some bloody steak please?"; "Do you want some fucking fries with that, sir?" - replies nonchalantly the waiter. "Mechanisms" is a bloody raw steak with fucking fries and just a bit of salad on the side. Complete meal for those who don't really want follow a low-calorie diet.