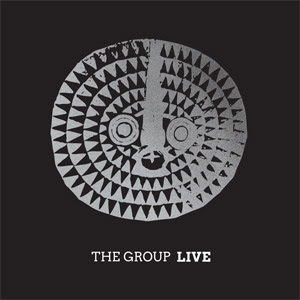 The Group - "Live" is yet another volume in the No Business unnamed "vault" series , making available dug up archive recordings that document some of the lost chapters in free-jazz history (Billy Bang's Survival Unit, William Hooker & Thomas Chapin duo and Thomas Borgmann Trio have already appeared on the blog).
It takes tjust a quick look at the names' list to know that this a heavyweight band. The Group did never got a chance to document their music in a studio which makes this release a true digger's treasure.

To name a band "The Group" that's both modest and bold statement. The main idea was create a true collective, equally an economic choice as artistic statement born from and reactive to the reality of the 80s. This means everyone brings own material for the musicians to play, everyone participates in the promotion efforts and expenses. Everyone shares responsibilities and credits. A true interdependent unit.

The music played by The Group shows deep appreciation of black music history. Billy Bang's violin brings always to mind the rural blues feeling and gutsy folk expression. Marion Brown's bright sax sound is rooted in swing era, he's responsible for the arrangement of Mingus' classic "Goodbye Pork Pie Hat" which he introduces with a soulful citation of negro spiritual "Wade in the Water". The 18-minutes long span allows plenty solo space to all the musicians and they truly are on fire here.
The sunny "La Placita" penned by Brown, rides the latin/carribean danceable rhythms,  with Ahmed's poignant tumpet's tone and Mariachi-like bravado spicing up the mix. The cd ends with the 25-minutes long "Amanpondo", originally composed and sung by Miriam Makeba (arranged for The Group by Ahmed). The song is irresistibly joyful,  filling the air with the community feeling of an african chant as all the musicians  bring  some of their most inspired playing on the album (you can't be uninspired having Andrew Cyrille, Fred Hopkins and Sirone playing this kind of a fat groove).

The three long-burners, with the addition of two shorter tracks, fill up tightly the cd space (the NoBusiness folks do remember about their vinyl fanbase but, the single LP edition do not include "La Placita" and "Shift Below" by Billy Bang).

The music on this cd testifies to the vitality and persistence of free-jazz scene in the 80s and its release honors dozens of other unnamed and undocumented groups of the era. There's enough sincere passion and heart and energy in this music to top any rock'n'roll gropu in a showbiz.
Thanks to everyone at NoBusiness for the efforts they put in making this release possible, huge thanks for Ahmed Abdullah who portrays The Group's history in the extensive and informative liner notes. The documental value of this record is by far outmatched by the quality of the music itself.
Autor: jazzowy alchemik o 10:00 AM