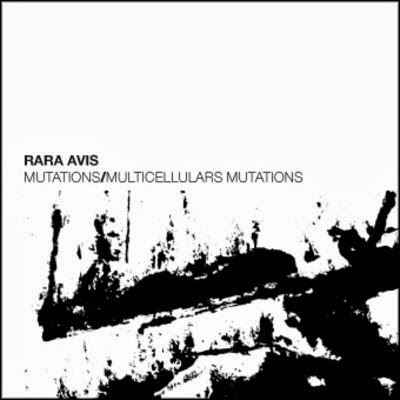 Blog's followers should already be famiar with the the names of Stefano Ferria, Simone Quatrana and Luca Pissavini (all three are playing in Ferrian's Nutimbre, Luca Pissavini appears as well on the Nido Workshop cd). I believe Ken Vandermark needs no introduction whatsoever to anyone even vaguely interested in improvised music. The same can't be said about band's electronic tinker SEC_ was only introduced to me through this cd (an group's concert in Alchemia last year).

It would ne only to easy to use Vandermark's name to front the band for promotional purposes but that wouldn't be true to the music. There's no leader on this recording and each player has immediate impact on the music (in fact, although Vandermark and Ferrian are in front of the soundstage, sporting their muscles, I'd say that it's the other three to really define the quintet's sound). The playing is completely free, varied between the chamber-like moments and of silence and those of frenetic energy.

"Gene Flow" is particularly lyrical, with post-romantic piano ouverture, followed by subtle tenor linear melodies (along circular ornaments by clarinet), SEC_'s carefully manipulates the sound throughout, with analogue noises, gentle modulations, transforming the sound alltogether towards the end of the piece. The shorter "Mutation" is instead a vulcanic free explosion, with Pissavini furiously bowing the bass, two saxophones going head to head against each other, Quatrana's jumping over the piano's keys and constant electronic glitches, melting all the sounds together in a big boiling bowl. The group's playing is quite dense, very democratic, with roles and accents constantly being shifted between the members, the lack (not perceived as such) of drums allows for a very liberal approach and dynamic flow of the music.

The artfully packaged release (the thick paper unfolds into a small poster) contains two cds. The first ("Mutations") contains six group improvisations (the titles are: "Adaptation", "Genetic Drift", Gene Flow", "Mutation", "Natural Selection" and "Speciation" tell a story of how a new race is born). The second one is "Multicellulars Mutations" might be treated as a bonus (21 mins long) but should not be overlooked. It contains 3 duo and 3 trio improvisations. It's not unlike watching a single elements of a complex construction interact together. It showcases the relationships that made the first disc such a success. Of particular interest is the duo with Vandermark and SEC_ where the latter shatters and scatters the timespace in pieces, while soaring clarinet is trying to sew it back together.

Rara Avis is latin for a "rare bird" , a term used as well to describe a valuable collector's item. A fitting name as it is rare to hear music that so organically blends acoustic and electronic elements, a succesful mutation. One of the most daring and fully realized albums of 2013. Very strong recommendation.

ps. this will be the last one of the New Jazz from Italy series for the moment but I'm convinced we'll be coming back to Italy soon enough for more good music.