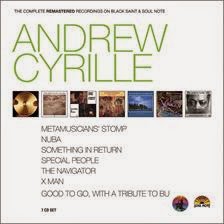 This is the second half of the text dedicated to the Andrew Cyrille's box which is the part of the brilliant series "The complete and remastered recordings on Black Saint and Soul Note. Check the previous post
for the complete overview of the set.

Definitely the most "out" releases in the pack, especially the "Nuba" with Lee's idiosyncratic singing and poetry. Very artistic, spacious and spare playing of the three, completing each others timbres and registers. Lyon, who is criminally undervalued,  with his pure alto sound is a particular treat (check the frenetic, scattered lines in "Sorry"). Lee's voice is clearly an acquired taste but her contribute to the music is undeniable, which doesn't happen that often within the "jazz and poetry" format.

"Something in Return" starts with a quirky (but in a good way) version of "Take the A train". The duo cd is also the best chance to fully appreciate Cyrille's drumming, his drive, ethnic propulsion, melodic variety and creative surprises (the opening piece will have him go all the way from rampaging toms down to brushes whooshing through the air). The title track is a call & response dialogue between the drums and the alto and the level of communication and the way the two react to each other is a beaut. Blog's readers know me to be fond of a drums-sax battles and this one is a great one. Power and grace united.

The star of the last two albums is James Newton on flute - his playing is light and gracefully melodic, be it in the vein of lyrical bossa nova ("Answer Me", "Lydia"), a joyfully hoppy tune ("Akan") or a laid back and slightly funky blues ("A Simple Melody").Both cds are basically played by a trio as the guitar makes only a rare appearance (usually in a rhythmic role, though the delicate melodic counterpoint in "A Simple Melody" is very welcome).
The second cd starts and ends with two takes on a "Tribute To Bu" - a Cyrille - Newton duo with galloping drums and swift flute flying over. The duo intro is followed by funky "Oblong" played with a nonchalant swag and charming and warm sunny ballad "Enter from the east". The music is striding happily and nonchalantly as the tracklist unfolds be it the fast swing of "Hit it" or the funky grooves "Good to go" or "Fate".
Of the two releases I find "Good to Go" having a bit more consistence in the material but both are a pleasure to listen to, probably some of the best "jazz flute" albums around.

Andrew Cyrille's albums as a leader show quite a different side of him that the feriocious avant-guarde he did as sideman (most notably to Cecil Taylor). Do not trifle though, the fact that it's accessible, enjoable and easy-listening doesn't make it trivial. Jazz rarely gets this graceful and this is an excellent set of music.