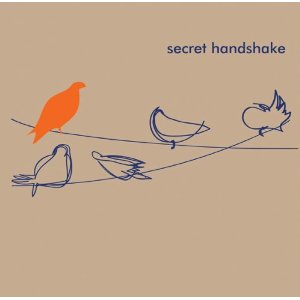 
I remember already writing about how exciting it is to be introduced to new names in improvised music - no expectations can lead to great and surprising discoveries, while they can't really dissapoint you too much (worst case scenario they leave you vaguely indifferent). Which is very cynical way to look at it I guess, but for me most importantly every new name I meet is a testimony to how rich the world of music really is and how much great music is being made today (no thanks to those propheting everywhere the death of jazz, rock or else).

Five (out of eight) tracks are played by a quartet (sax-piano-bass-drums) and, although there is no mention of who is the author, they are (four of them) quite clearly composed pieces of music. And all of those are very intriguing, with themes full of twists, with apparently contrasting elements, steady beat contradicting quirky themes and loosely playing frontline. The contrast between furious flights of piano and sax, supported by steady and cool rhythm is really inspiring and the ability to make those different qualities tick together is somehow reminding me of Satoko Fujii's way of composing for her acoustic quartet. The rhythmic backbone of those (simple and effective like in "Anti-War March") allows the soloists (usually simultaneous dialogue by sax and piano) to dig deep into the melodies without loosing the focus and touch with the initial theme. The last of the piano quartet pieces "Gardenia" is a charming and lush jazz ballad, quite surprising considering the fact the previous pieces had no clear elements of jazz harmony really and some rhythmic elements (like the rimshot beat in "Bizon") suggest influence of modern alternative rock music or other popular genres.

The remaining three tracks (number 3,6 and 8) are improvised trios with double drums - percussion combo. Freely flowing, complex and vivid saxophone against the perussion whirl  of a drums set and ethnic hand instruments creating both dense and light texture, where polyrhytmic tradition of pulsating free jazz drumming and sounds of ethnic dances mesh together. Lot of immagination and inspired playing in "Secret Handshake" and "Soulnimsky" while the aptly titled "Grandmother Tells of Africa" brings the album to a great finish. Starts with a bit of mysterious shamanism but then the rhythm just takes over for a true drum battle, as the soprano saxophone sings its song joyfull and wild (actually this one features a strong theme, could be composed, not sure if it's of any real imortance to mention it though - music is music).

I hope this gets some recognition as the writing is strong and original and the playing equally so. Very post-jazz and modern in the way it draws on other musical idioms which only makes it truer to the jazz spirit than most of the so-called jazz artists playing "Summertime's" billionth copy. Strongly recommended.

I featured two tracks from the cd on this playlist.
Autor: jazzowy alchemik o 1:50 PM