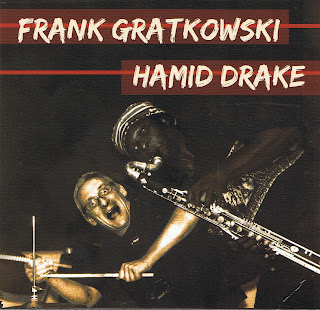 
Sax(reeds)-drums duos are among my favourites, this format is a vehicle that allows the musicians the freedom to go any direction they want, while providing the means to play simply just the two elements that are primal to music - rhythm & melody.
Add to that premise the presence of Hamid Drake who brings light and life to the music anytime he plays and is one of the busiest drummers in the field - it's a true joy to see him live on stage whatever the group he's playing  with as he makes the drums set dance and sing and play.
With Frank Gratkowski proving his worth as a companion, the duo plays the music that is rich, joyfull and exuberant. They start with "Brother G's Walk" and Gratkowski immediately calls in an entire array of overshrieks and timbral effects on his alto to pair his sonic explorations with the contagious power of the groove - I tell you I don't know any other drummer who can put you in a head-banging, foot-stomping mode so easily and graciously as Hamid does! He could play the entire album consisting only of variations on high-hat / snare drum and kick subject. Irresistibly enjoyable piece slows and quietens down near the end with a mesmerizing mixture of trickling whispers and breaths by the alto.
"Square Root of Distraction" shows a different side of their playing. Pensive, eerie, spare, with long and low tones by the bass clarinet accompanied by the mallets on toms and metalic accents, this one floates slowly over the ground, gaining the momentum, the speed. Patiently preparing the ground to start a furious chase of fluttering clarinet shrieks and frame drum attack signal.
Add to that "Well, It's complicated" as a second saxophone piece that grooves and "Varm Somehow" as the second clarinet piece that 'floates' in more abstract ways to fill the album - as much as oversimplyfying is that  statement (especially considering the fact that "Varm Somehow"'s later half is build upon a blistering alto solo)   allow me for the sake of not making this review too long.
The power of this duo comes from how versatile those two players are and how eagerly they follow and adapt to each other. Frank is obviously rooted in the european traditions of improvisation, his playing heavy with sonoristic experiments, working outside the common sounds and techniques, but while he's melodic and sonoristic approach points toward the abstract and complexed, he doesn't hesitate to groove hard with those elements.
On the other hand, while Hamid can lay a beat like no other, he's sensibility and mastery of the instrument allow him to follow Gratkowski playing closely paying as much attention to the melody, the sound and the abstract narration twists as to the basic groove.
A balanced approach makes for a balanced release, but it's too little to say - the way those two play with (and not against) each other, the way they listen closely and react to each other's ideas, while mantaining their own individuality and finally the way they joyfully enjoy the music is what makes this album great. An hour of delight not to be missed.

I featured a track from the cd on this playlist.
Autor: jazzowy alchemik o 8:43 AM