I will try to make up for the recent lack of activity on the blog by putting together series of brief reviews/impressions of albums that share something in common. The first round will see paired together two orchestras, a musical entity of many diverse historical backgrounds - as one could think of jazz big band as an expansion of combo band as well as genre-transgression of classical symphony group. And this bi-polarity is well exemplified by the pair of the orchestras about which below and in the next post. 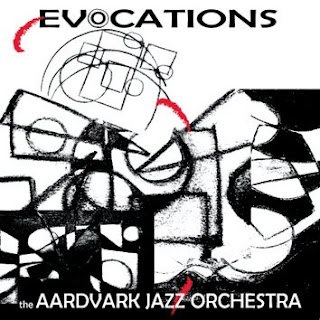 I'd like to think that Jazz Orchestra is somewhat of a balancing act. You have a massive sound at your disposal, a ton of colours and shades, yet you have to make a wise use of those, as it's so easy to loose the power of singular vision, personal statement, within all the mass. And I think that set of tunes composed for the band by Mark S. Harvey does just that.
The cd starts with "March of the Booboisie", with its steady rhythm and quirky, whimsical dissonance of the various horn sections and somewhat comical trombone - trumpet duet, yet at certain point it breakes into the heroic line of  and ends with eerie, mournfull, reflective chords.

There's "Dig the Dig" a theatrical narration with it's scarsed and slightly street-city cacophonic instrumentary cacophonics that makes me think about some of the Mingus narrated pieces for large ensembles. There' similar vibe to "Rascals & Scoundrels", bluesy foundation to the trombone riff, piece, repeated by the entire orchestra, dramatic noir narration, filled with tense chords, wonderfully finished by delicate, spare piano solo. "Closer Walk" is an elegiac, surprisingly modern and sublime take on the New Orleans and gospel tradition.
The last of the seven tracks is the monumental 20-minutes long "Sumner", a virtual journey through tumultous history, with passages of tremendous kick&punch energy as well as those of introspective reflection quality. At about 12 minutes into the tracks there's  as energetic solo on the tenor sax by Arni Cheatham, with its soulfull start and crescendo driven by thunderous rhythm section, joined later by the trombone by Bob Pilkington while the entrie orchestra adds its chorus commentary till the mayhem breaks loose and stop abruptly for the solemn coda - definitely my favourite moment of the cd.
So if you like Jazz Orchestra (and Aardvark bands stays true to its name) this cd is well worth hearing. You will find here the colourfull refinement of Gil Evans works, the harmonic, dissonant edge worthy of Stan Kenton and also some nasty jazz kick in the spirit of Mingus. Spirited compositions and inspired playing. A well balanced act indeed.

The liner notes will guide through some of the inspirations of the pieces, most of them dedicated to some political figures, both positive and negative. You can also see the film that presents the analysis of the ""Sumner" which is dedicated to senator Charles Sumner - an ancestor of the Aarvark's leader. An interesting watch although its unfortunate that the musical piece is cut by the commentary.

the 2nd Orchestra in the next post tomorrow.
Autor: jazzowy alchemik o 11:25 AM