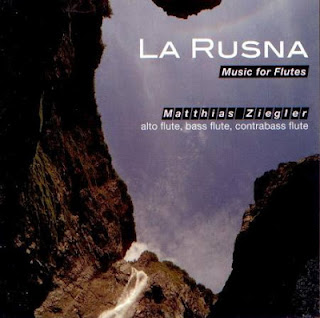 I have to admit the idea of a solo flute record didn't seem to exciting at first but once I hit the play button I had to re-evaluate quickly my position.
The title track that starts the cd is a 20 minutes long meditation that will transport you into an otherwordly sonic reality of echoes, drones, evershifting, interchangeable, trembling, vibrating sounds coming from a deep ancient well. Surreal, gripping. Matthias Ziegler presents an unique palette of sounds, making use not only of wide range of flute types and extended techniques but also augmenting the sonic possibilites, or the perception of the sound objects with carefully placed microphones.

In "Stop n Go" just the sounds of breath and tapping of the keys create the illusion of a mighty bass drum, marking the groove of the short, sharp breaths. There's something basic, primal about the flute's sound, and something deeply powerfull in the fragile timbre of the instrument. It's a power of rite, of sacrum, of mistery. "ContraBasics", with its slightly metallic, rusty overtones would be just perfect score for a monastery movie scene, possibly  placed in the high, unreachable and dangerously beatifull mountains. As the piece continues  the variety of the tones the bass instrument is able to produce is just astonishing (double bass string? tuned bass drums?). "Ave Kingma" (a piece dedicate to Eva Kingma who constructs flutes for the artist) sounds like a Bach's organ piece you can hear  both the chord's progression as the basso continuo counterpoint being played simultanously. Throughout the seven tracks (totalling 70 minutes of music) the record never ceases to surprise which is an achievement on its own.
Ziegler's musical vision is incredibly rich and compellingly unique. Which makes this album so gripping, so intriguing and so inspiring.