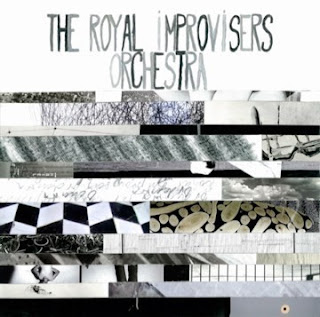 And here's the 2nd Orchestra I promised in the previous post:

The Royal Improvisers Orchestra
Live at the Bimhuis

A welcomed first release from a new label that is about to focus on Netherlands improvised scene presents a meeting of a handfull of musicians from around the globe, geographically and musically speaking as their main fields of activity range from baroque music to noise. A different kind of balancing act, one where the improvisers' taks is to connect and create a big picture, put together an impromptu puzzle without having the box cover to show you how it's supposed to look like.

Five game pieces, conducted improvisations led by different ensemble members, playfull and insightfull. "Collective Improvisation" is with its circling suspens could be a soundtrack to a Kafka book. There's something disturbing, claustrophobic to the amount of sounds circling stubbornly in the air, as it reaches its climax the music becomes dense as the tension in the best noir action movie, stops abruptly leaving space for a whimsical human voice, joined by others in what becomes an orgy of liberating crazy.
"Burocratie" circles around two notes hit by the tenor and drum kick, joined than by an electronic scratch, another drum set, a high pitched electronic hiss, a piano note, a short scream voice, everyone gradually adding new layer to the repeating cycle, that, having started so basic, grows denser, heavier, wilder, noiser. A rolling snowball that incorporates new elements from the ground with each roll until it spins out of control. "Imigratie Walk" starts with hushed orchestral chord and tune, a great, jazz-infused sax solo, sparingly commented by the other instrumens.
"Truism turism" unfolds slowly with eerie, slowly progressing chords like in an ancient chant (beautifully paired sounds of human voices and flute against the airy, dreamy and enchanted harp sounds). A dark, mysterious and intriguing piece. "His Composition" is possible the most tumultous piece of the album, filled with sudden dissonant outbursts, disturbing hushes and cries, abrupt changes and pauses, sudden contrasts in rhythm, dynamics, texture. Seamlessly transforming one structure to another, with no hesitations leaving any kind of achieved order to look for a new one. A constant dialectysm of structure and mayhem that should please any avant-guarde ears.
With so many musicians in the ensemble, the discipline, the cohesion, clarity of direction is quite remarkable. Absolutely great orchestra music, admittedly crazy at times (crazy is good). And make no mistake there's close to none jazz to it, this band (as The Aardvark Jazz Orchestra) also stays true to its name. Both truly deserving a recommendation.