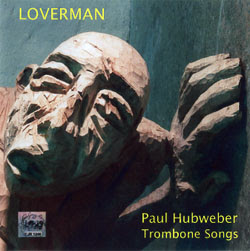 
Ever wondered how a crazy bebop tune like "Anthropology" would sound slowed down to a ballad tempo, played on a solo trombone?
Well, frankly the idea never occured to me, but it did to Paul Hubweber, and I can just say it sounds pretty great if you like trombone. Hubweber's glissando's are pure fun, his roaring tone a pleasure, his polytonal abilites impressive.

A selection of Charlie Parker's tunes plus the title standard (one of Parker's favourites) makes half of the album. All played deliberately slow, and as the melodies are stretched in time they acquire new, suprising features, sometimes bit comical, sometimes nostalgic, sometimes deeply bluesy. Those surprising readings have some undiably charm. Like the melodic, elegant reading of  "Donna Lee" or the simple melody of the Beatles song, or the surprising glissandos of the "Loverman". Or the "Albartz Lark's Tongues" - a fantastic reading on King Crimson's monumental piece. Hubweber is not flashing his instrumental talents but it's quite clear they're there.
"Loverman" doesn't reinvent trombone language, nor the song format yet it delievers perfectly nice what it promises - trombone songs, which not an easy task. So if you like melodies played deliberately slow on the trombone - you'll enjoy this one a lot. Basically, you have to like low and vibrant trombone sound, the rest should fit you well.