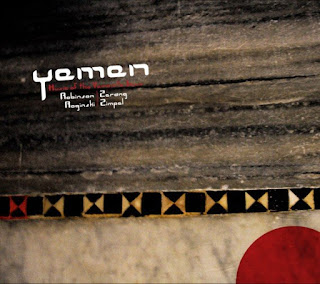 The music on the cd was first presented as a special project, part of the Vth Tzadik Poznan Festival. As most of the material is taken directly from the live recording (with just one track from a session recorded the following day) I'll remind the review I wrote after that evening:


A special project of the festival ws presented on the final evening - a band created on the occasion of the festival , to present music of the Yemenite Jews. Reconstruction from archival notations of songs 5000 years old.

Anyone who saw Zerang on stage, a man of a respectable stature, knows he can seem to float over the ground when he starts playing. Light and finesse - he's playing is so natural, like a heart-beat, and so agile in all kinds of ethnic variety of hypnotic rhythms.
Raphael Roginski's style of guitar playing is unique, his chords providing a rich texture and rhythmic support but it's his sound (which can be delicate like a hendrix-like sharp and energetic), so much his own that it impacts any group he plays in.
And finally Zimpel and Robinson on the front-line, exchanging passionate if gentle solos, spiralling lines back and forth. Zimpel's becoming a master on his own, Robinson, an elder wiseman among the young ones patiently speaking his words.
Yet the music is so much more than just a sum of descriptable ingredients. Incredbile sense of communication, sense of unity and finally, sense of complete alienation from the temporal reality - which makes the music thousands years old feel completely universal, above the time reality, so much in-the-moment.
I t was music that was pure and simple, music that brought peace to the mind and soothed the soul.

The music on the "Yemen (music of the Yemenite Jews)" is peacefull, meditative, spiritual - uplifting your thoughts and spirit. Archaic melodies are not really old, they're eternal - the passing of time is irrelevant.

I'll just add one other quote, this part from the interview with Waclaw Zimpel (you can find the whole thing in the interviews section):

So, as there is no, or there should be no barrier between internal world and the sound, there's is there in Your oppinion no real distance between this world and such ancient music?

"If we start analysing music, purely from a theoretic point of view : virtually in every culture a pentatonic scale can be found. A great amount of music composed contemporarily (for example Steve Reich) is based on the pentatonic scale. Obviously each age has its own characteristics, but I don’t feel that things composed today are that much distant from the music played thousand years ago.
Besides it’s still about the same thing - to live an experience, in a place where people gather together, some of them play, some of them listen. Ritual of transgression, katharsis, entering the state o meditation. At least that’s what it is about for me."

Enough talking. This one is supposed to be listened to through your heart.