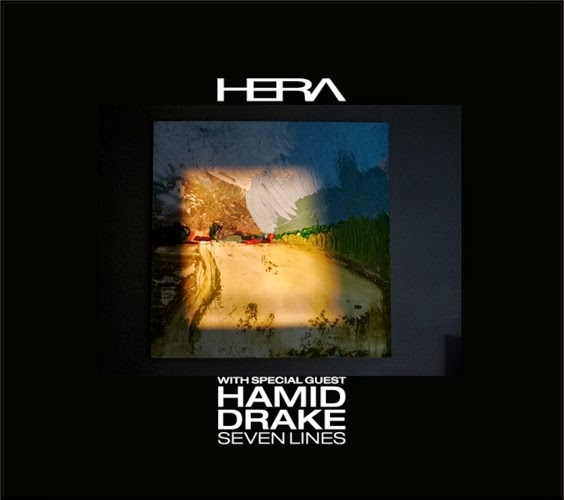 It's high time to end the holiday break on jazz alchemist blog and "Seven Lines" is perfect album to do that, for many reasons. the most important being this is possibly some of the most beautiful music released in 2013 (and 'tis the season for the list of various kinds). There's a proven recipe to make great records - just release great concerts, when they happen, and "Seven Lines" is a chance, for those few who were lucky to be there, to get back to the fond memories of one evening in October 2012, at Manggha Museum in Krakow, where IT happened. I wrote ecstatic words afterwards, and today I stand by them with even more conviction:

Trance, hypnotic, the music would shine with the rhythmic propulsation provided by the double drums sets behind, with the polyphonic melodies presented by the double front line, with the steady bass groove, with sharp guitar sound and the drones of hurdy gurdy.
There was something absolutely magical about the performance, complete and total experience of sound, rhythm, melody. Omnipresent, the music would take you in wholly, showing you the paradise world of universal love. I honestly lack word to describe the passionate feeling that the music gave me. Hats off especially to Maciej Cierlinski who just added an entire new universe to the band's music (also the craziest solo of the night, if Jimi Hendrix have played hurdy gurdy, that's how it would sound). It was also the first time I've heard them with Raphael Roginski and his unique sound would enhance so fabulously the constant melodious flow.
To have listened to this band was like to jump into a river, and just keep floating, keep admiring the constance of change around you, and it felt so safe and natural to meet all this with an openess of mind and heart. In the words of Joe McPhee: "fucking amazing".

There are more stories behind and to this music. There's the story of quartet's meeting with Hamid Drake in Lublin. The concert series in Sklad Butelek through which the quartet met with Maciej Cierlinski and Raphael Roginski, both crucial for the music's sound. There's a story to each of the five pieces that fit onto the cd, which prove further the scope of band's musical inspirations - the compositions refer to Iran, Japan, Tibet and Russia. There could be many more words written about "Seven Lines" but words don't really do any justice to it. This is a music you can can loose yourself in follow it through its many wonders. A precious memory you can share. Joe McPhee nailed the description part, all the rest is just unnecessary detail.