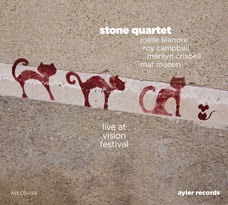 The jazz community has been painfully experienced last week with some sad news, the echo of which reverbed through jazz sites, blogs, social networks etc. This post is an echo, dedicated to Roy Campbell, but also Amiri Baraka and Izumi Uchida who passed away almost at the same time.

Roy Campbell appeared on the blog just twice, on the occasion of his duo cd with Ehran Elisha, and a concert with Nu Band. Fortunately I had a chance to see him play on a few occasions in Krakow, always in top form on stage, his playing filled with blues infusions, spirited and joyfull. His trio cd with Hamid Drake and William Parker "Ethnic, Stew and Brew" remains one of my favourites, a perfect introduction to the free jazz music.


The cd at hand which I decided to remind of is not a group led by Roy Campbell, his vast discography rarely features him as a leader. Stone Quartet was assembled by the unmistakenable bassist Joelle Leandre, features Marilyn Crispell on piano and Mat Maneri on viola and Roy, on trumpet and flutes. I believe the cd to be of aparticular interest in Roy's recording history as he kind of seems to be the odd element in the crew*, his playing ever rooted in free-jazz, while the other three members of the quartet explorations are mostly within, what we'd call, the european tradition of free music.

Leandre's raw tone on the bass is met by the pristine viola notes, spare yet sharp trumpet flights and delicate piano chords. And then it all changes. The cd presents two "Vision" pieces, a first one over half-hour extended improvisation of a kaleidoscopic variety, the instruments exchange the roles, twist the notes, change the direction abruptly or engage in microtonal explorations until the dense arpeggios of the feverish finale.
Vistion two is a shorter improvisation (9 mins) that starts with a short hushed mute trumpet intro, soon to be joined by pizzicato bass tones, subtle viola arco. A threeway dialogue resolves in a trumpet tremolo that invites Marilyn Crispell to join with soft, suspended tones.
How to describe the continous change? Once you manage to capture the moment, it's gone. The four musicians engage in a conversation in which, without any unnecessary exaltation, they explore tones and dynamic ranges and the universe of musical possibilites, with a sense of focus and adventurous immagination. Intense and passionate, cerebral music to listen closely to.

After the second piece ends, you can hear Joelle's laugh as she presents the band. As the voice fades away you can hear "Thank You, You' were wonderfull", now I don't know if she said to any particular musician (they all deserve it) or maybe the audience, yet somehow, I'd like it to mean: Thank You Roy, You were wonderfull.

* obviously not the only example of the case. Roy's playing with Peter Brotzmann was a surprising fit if there ever was one (recordings with Dog Eat Dog quartet and Chicago Tentet).