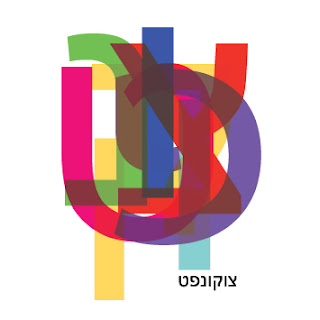 Cukunft is a polish group which, until yesterday, I had a pleasure of only hearing once, couple of years back, performing as a trio. Now they perform as a quartet led by Raphael Roginski on guitar, with Pawel Szpura on drums, Michal Gorczynski and Pawel Szamburski on clarinets (the first doubling on tenor, the latter on bass clarinet). The band's name means "future" in  yidish and they are playing a mix of traditional jewish tunes and compositions by Raphael based on klezmer scale.
While the music is very traditional, the playing is definitely not, the band spicing the klezmer music with some rock tinges, punk attitude, free-jazz blowing improvisation and to simple put it a lot of madness. Hypnotic tunes are driven by powerful yet very imaginative drumming by Pawel Szpura. Great unisono lines by clarinets. Raphael is definitely one of the most original guitar players I've seen, capable of both lyrical understatement (preparing the strings with pieces of paper) and hard rock powerful chords or soloing, also some noise feedback playing. Two-clarinets frontline is very expressive and energetic, too bad it would sometimes get lost because of no amplification (especially the bass clarinet would suffer).
All music is getting frenzy, crazy and whole lotta fun. Shame there was no dancing floor. While I'm not really sure if there were any originals among the songs played that night, two citations included in two very groovy improvisations were great - riff lines from "Paint it, black" by Rolling Stones and "Break on through" by The Doors. Amazingly hypnotic and energetic.
The title of the Madman of the evening goes to Michal Gorczynski who plays sometimes jumping into the air, sometimes on his knees, dismantling the instruments and playing (like in 'having fun') with all the different parts of them (example: whistling into the bottom end of saxophone).
No point in writing anything more since You can heard some tracks on band's myspace page and their latest double-cd release comes easily recommended - recorded live is it is quite honest to the band's playing in front of the audience, when energy and passion, and fun come first before the perfect execution of material (although there are some lyrical and quite melancholic songs in the repertoire too).
Couple of things to say about the Bomba place - too bad the (quite tiny, but that's not the problem) stage is placed right next to the entrance. Since the concerts was free (which is definitely great in itself) this caused a presence of a lot of people casually walking in and out or chatting by the bar and disturbing the audience (filling all the space available) and getting really annoying sometimes (especially during the quiteter passages). Still it's nice to have new place where one can see some good concerts so I guess one shouldn't complain too much about it, at least for now.