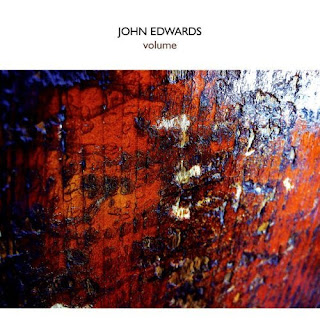 I've been planning to write about this for some time now. And the story that can tell more about the music than the actual review (that follows) goes like this:
John Edwards played in Krakow recently with Phall Fatale band (great concert, I'm crossing my fingers for their first release, to come out in 2011) and he was the only one to bring any cds to the gig - two copies of his solo outing "Volume". I was reluctant at first, biting my nails for many reasons. I have only a couple of solo bass records in my collection, solo performance is not only particularly difficult to play, but quite often hard to listen to. It turns into impressive technique show-off that serves mainly as and educational presentation for other instrumentalists, or into sonic exploration that, while still impressive,  is too hermetic to really get into, leaving the listener cold, or yet again is so full of abandonment and exhibitionism that it lacks any kind of self-control on the part of musician. And, while improvised music doesn't really care for those standards, solo record being made on an instrument that plays usually supportive role in the music doesn't really make it easier.
The first set of the concert was good and I gradually started to take seriously the idea of getting the cd, half jokingly bargaining with my friend on who should get it and whether it was or not the case of overinvesting before the other concerts coming soon (during the break the other copy was bought so there was only one remaining). All those worries were instantly erased when John Edwards played his solo in the middle of the 2nd set. I jumped off my seat over the row of chairs, run to the bar and make sure the remaining copy goes to me.
My impulsive reaction was definitely rewarded. While it is as demanding as one could imagine, it is also a total sound experience. John plays, bows, plucks, strums, bangs not only on strings but uses the entire body of the instrument, often drumming with his fingers on it, and he's not afraid of anything to get the sound he wants, may it be squeeky, screeching, swooshing, metallic, wailing, reverbing, echoing, in fact may it be almost anything You can imagine. His virtuoso technique is as commanding as is his immagination. His use of extended techniques is awe-inspiring, but what is more important is the sense of direction, the narrative line, dramatic, even theatrical in his sound gestures. The improvs can be light in sound, with harp-like sound ("Pin Drop"), or full of down-to-earth, woody sound of powerfully plucked strings ("Sprung") where spontaneously created groove is quite infectious, but this is obviously oversimplyfied description as "Sprung" moves freely within dynamic range and features parts where traditional walking and plucking disappears completely to make space for other modes of expression. John can sound like two players at once, playing with both hands on the neck of the instrument, or playing over simultanous drum-line (like in "Saddle" where his aliquot stringing sounds like a thumb-piano). Shrilling sounds of enourmous, vibrating and boiling with overtones (incredible how many shades can one tone have) arco playing in "Tunnel" will have Your less-inclined-to-free-sound-flatmates running.
This recording, while extremely personal and demanding (and deserving of) a focused listen, is also worthy of highest recommendation. It is spirited (even when playing is physical), it is intense and powerful (even when notes are spare and tone is light), it's extremelty sincere and uncompromising. It's a presentation of musical adventure where musicianship of highest order (Edwards is indeed a virtuoso of the instrument) is met by limitless imagination to create improvisations of striking power. Hipnotic and captivating, if sometimes quite scary. If You can appreciate this video, this cd belongs in Your collection.