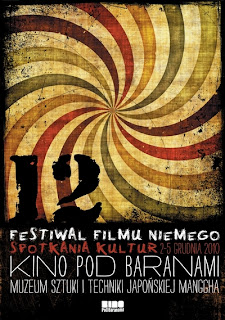 Had a chance to see a couple of movies during 12th edition of Silent Movie Festival in Krakow, a real treat. To see something as old fashioned as a silent movie with music so modern played live in the background is a quite unreal and special experience each time.
First at Kino Pod Baranami we watched Storm over Asia (1929) (this blog is not dedicated to cinema, so no real details here, check the links to imdb). Anyway the storyline is quite dramatic, with a couple of dynamic twists and great pictures presented (steppes of Mongolia are quite daunting). The music played by quartet is likewise dramatic, slowly building tension, fortunately not giving in into any easy world music suggestions given by the moving picture, but very much following the eerie and tense mood of the story, lot of sounds hanging in the air, great gong playing, lot of bows on plates and generally very delicate and suggestive playing by Klaus Kugel. Robert Kusiolek on accordion, who was completely unknown to me so far, creates some great, dark lines and the sound of the instrument contributes well to the climate of the movie. Mark Tokar and Waclaw Zimpel are in their usual fine form too. The music is quite cohesive, and, although sounds completely improvised, very structured, obviously thanks to very specific inspiration, with no real soloing going on, rather some moods flowing in and out, finding the balance between timbre and sound, and some long-forgotten, distant melodies, underlining the picture, enhancing it. Never mirroring the picture but following it very closely, and giving it more emotional strength (Some of the pieces from Zimpel's The Light trio 'Affects' release could be a good example of what I mean).
Then the audience moves to Manghha (in a festival bus) for Contemporary Noise Sextet (downsized to Quintet this evening) to see Piccadily (also 1929). This one could be very much considered pioneer noir move, with lot of seduction, dark passion and jealousy going on on the screen, also very modern. Again the band could choose the easy way and try to emulate the music of the era (lot of dancing on the screen, "Piccadily" is the name of the music club in London), but they choose to rather work on the mood and tension created by the stroyline. With some dense, rhythmically disturbed, only apparently smooth, grooves (great playing by Kuba Kapsa on drums, lot of drum'n'bass like fast brakes). Even the more laid back tunes have some dark tones to them and the whole time music kind of prophets the dramatic finale of the movie, pushing it forward, changing the perception of the scene sometimes, giving it more tense edge. While the playing itself was surely not entirely my cup of tea, it fit the movie very well, with a great downtown line opening and closing the spectacle, a portrait of big city - London, the city that never sleeps. As all of the big cities in this world.
This was extremely busy weekend (check the previous and the next post to verify) but Silent Movie Festival is something quite unique, bringing together art of the past and the present in a way that creates a very surreal experience. The music obviously shouldn't be judged by the usual standards, both bands playing servant role to the picture, both finding a very own way to comment on the picture and succeding in doing so. Whenever You have an opportunity to see this kind of event, take it, or wait for the next year in Krakow.
Autor: jazzowy alchemik o 10:04 AM