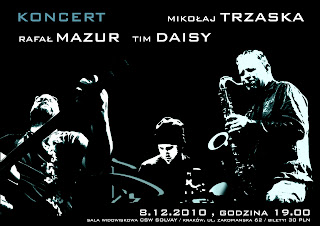 While Tim (no doubt) and Mikolaj (I hope) need no introduction, Rafal Mazur is probably the least known musician among those three. Highly active on local stage, somehow of a founder of improvisor's scene in Krakow. He plays an (electro)acoustic custom made bass guitar and works in a whole lot of ad-hoc groups and a few stable partnerships (Ensemble 56 and duo Keir Neuhringer come to mind, both have releases on Not Two).
While Mikolaj had played both with Rafal and Tim, the latter two never played together so this was their very first meeting. The band starts up with a 'high C' , sharp, edgy, energetic, straight to the business. Mikolaj takes the lead part, managing to stay on the top of the sound of the very busy rhythm section. Tim gives a strong pulse, pushing forward constantly, utilizing his whole set of different drumsticks, some giving a very 'toy' sound. And Rafal takes care of the base, but his bass lines are far from typical. He plays with a dense, deep, blurried sound, till the point when it's impossible to single out the notes. It gives this dark power feeling to the whole: raw, full of gravity, somehow like a black hole, emenating with strange kind of menacing energy (and on that note, his playing reminds of Peter Friis Nielsen, but, thanks to the acoustic instrument, his sound is still quite unique). There's a nice duo between drums and bass, and great, fast and dynamic solo by Tim (that, funny enough, had this big band sound to it, Buddy Rich or Gene Krupa maybe). Mikolaj on reeds leads through, switching between reeds, combining intense sound with more melodic or almost boppipsh lines, also playing on some toy flutes and toying with the instruments' parts. At one point he starts whistling this jumpy tune than he repeats it on sax, and finally elaborate on it into all directions possible. There are some more meditative moments, usually with Mikolaj on tarogato or bass clarinet, but overall this 45-minute extended improvisation is as energetic and as intense as it gets. Definitely a powerfull statement, cupped up with encore that moves swiftly between windy sound of neckless, disassembled sax, some screeching overblowing till the tempo slows down to something like a late-night jazz groove. I really hope this band will be able to play again and record together next year.
For those of You that can get to Sanok tonight – go and see the band live! :)
Autor: jazzowy alchemik o 4:15 PM