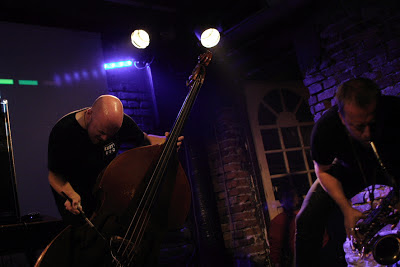 There are few bands in the business that can match the energy level presented on stage by The Thing. The band made a splash this year with the "The Cherry Thing" collaboration with Neneh Cherry but if you think they've been tamed and made ready to sail off to the mainstream market you couldn't have been more mistaken.

The Thing rocks the house with the first violent hit on the drums and the simultanous sharp note of the tenor while the bass strings are being pulled away. And so they storm forward and keep rock'n'rolling through dynamite gritty riffs. Paal ongoingly destroing the drumset with the precise hits, Ingebright plucking the bass strings mightily as if it were a flamenco guitar and Mats balancing his notes on his feet like the heavy weight box champion (on tenor exclusively this time, slightly less power but there's soulfull quickness to make it up).

In the midst of this punk'n'jazz rock'n'roll madness they can surprise you with anything from the hypnotic feedback-mike distortions to a heartwarming soulfull ballad (a wothy dedication to Joe McPhee). All that could very well happen in the very same piece as it occured during the first encore of the evening when I half-expected Ingebright to take the bass and tomahawk-smash the amp with it. 'Nough written. 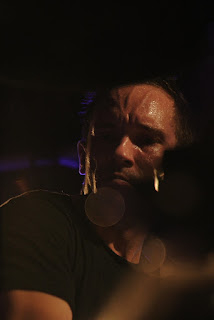 So here's a mad-dog* round to The Thing. For their continous tour in the search of "meat, barbecue sauce, adventures, vinyls, boots and booze".
Here's to The Thing. Knocking socks off your feet with their music since 2ooo.

mad dog - a shot with a vodka, raspberry juice and tabasco.