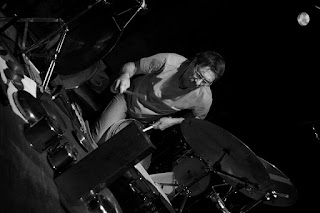 The idea of solo performance on drums and percussion must seem revolting to any mainstream kind of music audience. I mean in the end one can get to accept the lack of vocals (no lyrics?) but the idea of drums on stage seem to present all kinds of doubts (no melody?) till the point it might seems that it isn't enough to create music. A big mistake. Not only rhythm is the most basic manifestation of music but it's the innate base life. There's no life without it, and no story to tell.

Zlatko Kaucic who played with the entire who's who of european improvised scene is the kind of drummer whose playing I perceive as based upon that idea - that life is rhythm, and there would be no story to tell if it wasn't for that simple truth. He's a shaman who narrates the fables of ancient ghosts and poerform rituals to cast off the demons.
And sounds are means to tell the story, with the immagination being the only limit. He'd play the set of small frame drums, gongs, plates, cymbals, pots as well as toothbrushes. And it seemed like this and other objects were always intended for that kind of use. The sound and the idea - that's what you need to create music.
No gimmicking, no cheap trickery, just good storytelling - that's what makes the difference between true a wizard and the magician.