I have to apologize for lack of new posts recently but I am abroad for a couple of days with scarce access to internet and no time really to write anything. The radio program for tomorrow is canceled for the very same reasons. Next post quite possibly will be ready by the end of this week and next monday the radio appointment is on ;)
Before leaving Krakow for those couple of days I got fresh brand new cd from Not Two - Ken Vandermark Resonance - Kafka in Flight. Killing material which I will write about asap.
Autor: jazzowy alchemik o 6:43 PM No comments:

Email ThisBlogThis!Share to TwitterShare to FacebookShare to Pinterest
Etykiety: general

As any other monday I'm waiting for you with another portion of music at 8 pm on www.radiofrycz.pl. W'ell listen to some songs from recently reviewed "Triangulation : Whirligigs". Also celebrate birthday of such musicians like Trevor Watts, Herb Robertson, Andrzej Kurylewicz and the one and only Nina Simone.

edit:
Andrzej Kurylewicz's birthday is on 24.11. Yet the AllAboutJazz stays otherwise :) . Still it remains great music so no harm done if we listen to it without any occasion :) 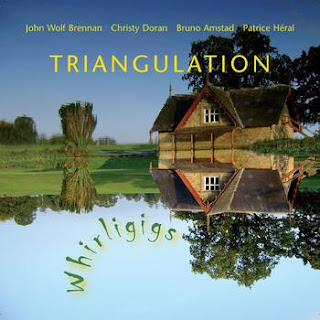 After a series of reviews concerning very serious music, big orchestras, whole sections of strings, modern chamber sensibiltiy etc. this one serves as a great antidote.
Call it a mash-up, call it eclectic, call it whatever you like, this is one of the strangest mix I've heard in a while.
Read the entire post ->
Autor: jazzowy alchemik o 12:54 PM 2 comments:

Tomorrow at 8pm (cet) I'm waiting for you on radiofrycz.pl with another portion of music. Becasue of the recent death of Andrzej Przybielski, his music will constitute the big part of the playlist (did you know that it is his trumpet playing used as the jingle of the program?). Also we'll remember birthday ofNancy Wilson (with a couple of love ballads for the St. Valentine's Day) and such distinguished musicians like Henry Threadgill, Nicole Mitchell, Fred Firth, with focus on their composer's work.

As always, detailed tracklist will be posted here during the program. Tune in! Waiting for you also on the facebook chat. 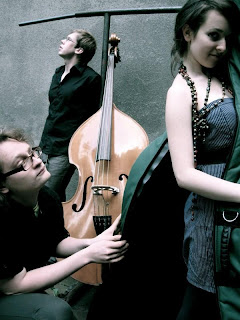 I wrote recently about this group here (although the previous performance was done in a duo setting) so just a quick resume.
Jazzed up and hip and modern take on folk tradition with voice / bit of clarinet, bass, percussion. Groovy and catchy bass lines, witty and sexy folk-culture-inspired lyrics (surprising how the 'folk' and 'sexy' can be used in the same sentence). Compared to a duo performance, this did have more kick, more drive to it, very high foot-tapping factor. It is after all, in the essence, drum & bass music and drum&bass drumming is sped up funk rhythm.  The repertoire essentially the same as on the last concert so no point in repeating myself about it, just check the other post. Folk can be fun folks. And it is quite refreshing.
Basia Derlak - voice, clarinet
Marcin Nenko - double bass
Tomasz Waldowski - percussion set, piano 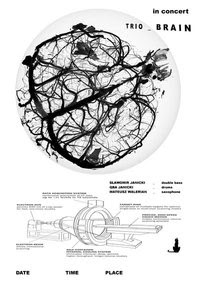 
I've been concert hungry for a while and this concert I was looking forward to. Qba (Kuba) Janicki made a great impression playing with Rafal Mazur Electro-Acoustic Quartet, Slawomir Janicki is a strong presence of Bydgoszcz and Tri-city scene since the yass revolution. Mateusz and Bartlomiej I did not know before.
The concert was dedicated to Andrzej Przybielski who passed away two days before and it started with an array of small bells, introducing the meditative atmosphere, joined by drones and ambient, blurried background noises by guitar, and lots of small repetitions by sax and bass. Long notes, slow lines, somehow esoteric, and the sonic palette is augmented with the brass sound, reinforcing the Przybielski reference. The concert is divided into two extended improvisations, changing often between otherwordly mood and energetic drive.
Janicki is towering over the group, both with his huge posture behing the double bass and musical experience, his tone is deep, raw, his playing powerfull, whether it's a simple repetitive three-notes base or speedy free walking. His solo, played with both hands clapping all over the strings as much as on the body of the instrument, somehow reminded me of the passion of flamenco music, probably the most impressive singular statement of the night. Qba Janicki has a very rebelious look and attitude, his playing subtle and impressionistic during the slower parts, but his direct, energetic and punk-driven beats moves the group through most captivating ensemble playing of the night. Mateusz Walerian is a new name for me, his tone is light and sweet, his playing warm, very melodic, while not being afraid of some tone and timbre explorations. Fresh and inspiring is the contrast between the free-jazz boiling section behind him and his cool, thoughtfull lines and very jazz phraseology, moving from blues, bebop, free-bop up to some not too extreme free improv. Bartlomiej Chmara's presence is the most problematic, his playing, mostly experimental, provides interesting ambient textures to more pensive moments, his full of noise effects solo intriguing, yet the electronic effects often disturb the cohesity of the ensemble's sound. I'm surprised myself to say this but I'd like less experimental attitude, more punk-rock kick with the guitar.
Overall, really good performance, and very promising talents, which makes me proud of young polish improvising scene, and I hope to hear more from these musicians soon.
Autor: jazzowy alchemik o 2:52 PM No comments: While both his recent releases (orchestral double cd "Bot" also on Not Two, quartet lp "February Fadontes" on No Business") are really good, I decided to get back to his solo outing which I feel is something really special.
Szilard Mezei, both as composer and performer, manages to create link between folk melodies and sophisticated avant-jazz or chamber methods and strategies of composition and execution. Here, in a solo setting, his musical vision is displayed as clearly as ever.
Read the entire post ->
Autor: jazzowy alchemik o 4:18 PM No comments:

Jazz Alchemist Radio with Szilard, Joelle, Joe and others

Hi
I'm waiting for you with some music at 8 pm (CET) at www.radiofrycz.pl and to chat with you through the facebook account (jazzowy alchemik or www.facebook.com/freejazzalchemist).
I will present some excerpts from the just reviewed Joelle Leandre double cd on Leo. And then we will celebrate birthdays of such artists like Joe Maneri, Szilard Mezei, Glenn Spearman, Okay Temiz. 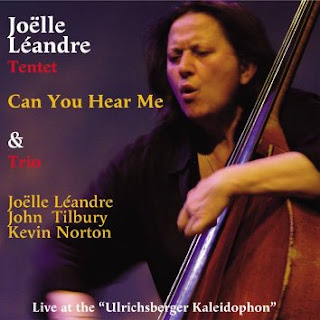 Tentet - Can You Hear Me


It's a silly thing really, but I'm always excited when I get to have the first cd of the new year, and this is the first 2011 released record I listened to. And I can begin by saying that this double cd, part of celebration of Joelle's 60th birthday, is a great start to, hopefully, another year full of new and exciting music
Read the entire post ->
Autor: jazzowy alchemik o 10:19 PM 2 comments:

Saturday at Klub Re, rounding up a small, three concerts tour in Poland, played Kayo Dot (a band I've never heard about before) with Jeremiah Cymerman (whose "Under a Blue Grey Sky" I recently reviewed).
The music was weird, anything from orchestrated ambient (two saxes, trumpet, clarinet and electronics) up to heavy high-screaming metal (with two guitars and a keyboard). First set mixed idyllic passages with mellow and moody songs (enormous delay on the mic makes the voice sound unhuman, uneasy), played almost entirely without the drums, it finishes with a thunderous drums solo (which reminds me immediately about the difference about jazz and rock drumming - it's all power and speed and the kicking bass drum is massaging my stomach). With Jeremiah adding his touch (extended techniques and lo-fi static noises). He sits out for the second set.
Once again I have to say it -weird music. With metal and ambient, and nicely arranged horns section, strange vocal. A music that is full of contrasts and torn apart between high-pitched singing and heavy bass. You can hear there darkness, heavy, jazz-rock (little jazz in it), ambient, echoes of grunge. Kayo Dot does to metal what Zappa did to rock, but with Dead Can Dance sense of humour (meaning none of it) - as the delayed vocal resonates like we were in an empty church, adding extra-temporal dimension to the music. Kinda freaky and quite disturbing, definitely very interesting, although not exactly my cup of coffee.

Stiil the main reason for me to be there was a chance to meet Jeremiah Cymerman and I did a short interview with him - here's what I asked about and what he said:
(it might take a moment before the players load, if any file is not working, please let me know)


1. First thing that came up (before the interview actually started) were Jeremiah's polish roots so I asked him to tell more about it:

2. I asked also about the origins of "Under a Blue Grey Sky" - a piece originally commissioned by Roulette, the release that got me introduced to his music.

3. With a lot of electro-acoustic improvisation, a classical string-quartet composition and collaboration with bands like Kayo Dot under his belt Jeremiah is crossing a lot of boundaries. The question was - are there any musical barriers left in New York music scene?

4. New York, New York. About its influence on Jeremiah - both on personal and artistic levels. Does the city create more opportunities or competition?

5. About how do the electro- and -acoutic elements relate to each other in his work

and a follow up to the question - whether electronic enhancement is Jeremiah's way of finding a personal voice on the instrument.

6. A performing improviser, but also a composer. How does the composing and improvising elements relate?

7. About his influences on clarinet.
8. About the music he listens to.

when I asked whether it could be about discharging those emotions, Jeremiah continues:

and that's all folks :)
many thanks to Jeremiah for the interview (hope I did ok for the first time) and to Luke Mosling from Porter Records who put me in touch with him.


(sorry for less updates recently on the blog but I've been having a guest, the Jeremiah's interview is already edited and should be posted this evening I hope, at least one review is coming by the end of the week)
Autor: jazzowy alchemik o 10:28 AM 1 comment: