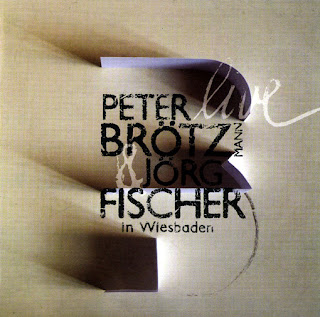 Sax-drums duos are among my favourites and regular readers of the blog are well aware of that. Peter Brotzmann at 70 years old blew me away last autumn with his Japan Trio concert and now he does it again with this cd.
Anyone interested in the slighthest in free jazz and improvised music knows well how Brotzmann plays - he's a heavywegiht champion, he can sound like a tank moving at the light speed, almost bending the space around him. His sound is physical and sometimes even brutal. When he blows hard it's like a heavyweight championship box fight. And while it's hard to dismiss the omnipresent vibrato distorion of his saxophone cries it's easy to overlook the fact that Peter is quite a lyrical soul at times, his playing full of details, pensieve and moody, especially on tarogato.
The cd starts with a heavy blast of "Productive Cough" but then follows "The Steady Hand as Planned" which starts with patient, gentle meditation that slowly builds up, gathers the speed and reaches into spiritual stratosphere with Peter riding over the steady tribal tom tom groove provided by Jorg Fischer. and calms down again with a beautifull clarinet coda. On that note - it's not an easy task to play drums with/against Peter when gets his thing going. Possibly it's like riding a rodeo bull, but Jorg Fischer proves to be an excellent partner wih the heavy hit of the toms but also great melodic touch on the plates and small percussion instruments.
"Buddy Wrapping", the longest piece of the album nearing 20 minutes span, has as well some ethnic feeling to begin with, dense and unstoppable Jorg's drumming (fantastic ultra busy solo in the middle) as Peter soars the air again with tarogato. And then absolute fury, power of tornado when Brotzmann takes the sax and Jorg Fischer destroy the drums set - all hell breaks loose. Primal, simple, bare instinct speaking. That's what I love about sax-drums setting - punch and cry. Simple as that. A mindblowing piece of incredible intensity with a soothing, delicate and lyrical coda to calm your senses with a surprising duplicity sound of alto and bowed plates, and distorted a'capella sax melody near the end that leads smoothly into mourning bluesy ballad "Song for Fred" (well at least it starts as  Brotzmann-ballad sort of thing, gets intense soon enough).
There's also "Cute Cuts" (starts full blast, peaceful in the middle, intense at the end) which ends the cd but let me stop here as you can get a much clearer idea about the music from the videos below than from my writing. This cd possibly won't surprise if you know Brotzmann, but if you like what he does, it will please plenty your avant-guarde ears. He's in top notch shape here and so is Jorg Fischer.