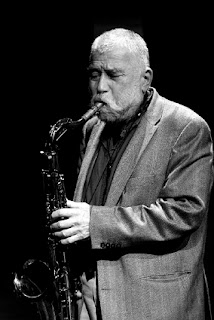 Peter Brotzmann celebrates this year his 70th birthday and he's touring like crazy. Just finished a four day feast Music Unlimited in Wels (I checked the schedule - he performed with nine different projects during the festival). And arrived to Krakow with a trio that brings almost 210 years onto the stage. And he brings the house down. Uncomprimising, relentless and wild spirit he is. And always was.

I remember a couple of years back the first time I've seen Peter on stage. My mind was blown away. I was crushed. It felt like a combination of tank (heavy) and machine gun (loud and fast) just went over me. I was so excited that I couldn't sleep and went half into the night writing down my impressions*. Brotzmann's sound is powerfull and unique. Rusty, vibrating, rough, rugged, deep. Filled with passion and vitality.

Instead of a tank I think now rather about images of nature. Powerfull even at the most peacefull, filled with primal, atavistic energy. Like a steep mountain river, winding, circling, crushing in cascades down on the stones in the falls, occasionally slowing, forming a bay. And you follow that river never knowing what's behind the next turn. Could be serene space or natural cataclysm - earhtquake, volcano, tornado, storm you name it. 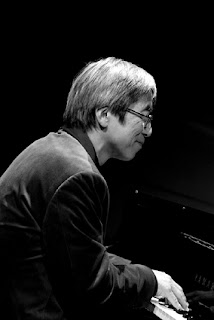 There's a Coltrane's box titled "Fearless Leader", during the concert I thought about Peter Botzmann as "Furious Leader", he's presence, the itnensity he brings is so demanding, so overwhelming that only few can keep up with him. And Masahiko Satoh and Takeo Moriyama are certainly in this group.
Masahiko's strongly influenced by Chick Corea, he's playing is sharp and dynamic, he varies between monumental modal chord structures (reminding me of McCoy Tyner) and quirky rhythmic plays (echo of Monk's approach maybe, especially on display during piano-drums duos). Takeo's drumming is absolutely unbelievable, at the age of 66 this guy's playing is an unstoppable, incessant storm, he's quite simply everywhere, powerfull, freewheling, pushing the music forward, the motor of the band (I thought of Elvin Jones).
The trio played for 75 minutes (including two half-hour improvs), Brotzmann switching between horns, the band splitting into three duos  - there was enough variety but most of all there was a sense of direction, of focus, of consistency. It's almost a custom to focus on Brotmzann's sound, but under the layer of distortion he's playing is actually immensely lyrical, which he proves with a most soulfull jazz ballad on alto in the middle of second improvisation. And then trio pierces the sky. And the intensity they reach (which doesn't necessarily represents itself in how loud and high the sound was) is absolutely fascinating. 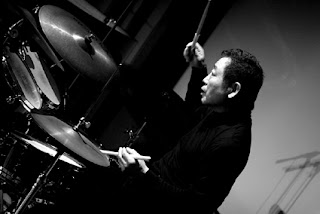 the encore from the concert: