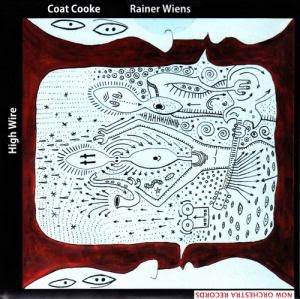 What comes to your mind when I say "Vancouver"? I'll bet it's not jazz and/or improvised music (it wasn't mine guess) but here's a chance to venture into Vancouver's jazz scene. NOW* Orchestra Records is a local label dedicated to the promotion of improvised music which gives us a glimpse of what's happening on Canada's West Coast (as far as creative music is concerned).


"High Wire" is a set of improvised, intricant duos. What I enjoy so much about this album is that each piece has its own identity, the ideas are plain and clear. There's subtle and elusively melodic saxophone against the thumb piano ("Elevation"), the rhythmic honking along the plucked and strucked strings ("Monkey Trails") initially feverish then beautifully soulfull sax lines against the melodic clicks of muted strings ("Storm Eye"). The spacious and rusty vibrato on horn against the suspended, distorted guitar feedback and echo (aptly titled "Dimension x Sound" - possibly the most developed improvisation,  volatile saxophone whispers accompanied by the entire array of dream-like guitar notes, gently struck strings to bring sounds and harmonies abstract and peacefull like clouds in the sky).
The title tracks that ends the album features ad raw, dark and menacing sound of bowed guitar string (vibrated to add dramatic distortion) against lonely lines of the saxophone, played in a clear tone yet seemingly unfinished, noir and minimalistic.

The versatile textures and unorthodox appraoch to the instrument by Rainer ("Space Landing", with its trembling, metallic noises would be a perfect background for a suspense sci-fi scene) fit perfectly with the  Cooke's saxophones, a very individual voice, focused and restrained, carefully treading between the  surprising melodic grip of his improvisation and the attention tonal nuances.

Surreal and immaginative, evocative, the duo's music is personal yet universal in its scope, its focus, its ability to listen, react and co-create. A much welcomed release, do remember to put Vancouver on your jazz map and keep listening. A highly rewarding, if unexpected, treasure.

the cd is present in this radio playlist.