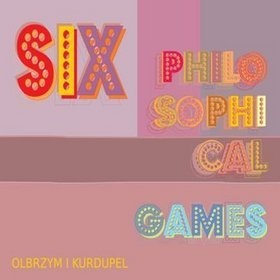 The story is: the two musicians met at a jam session in polish Tri-City and there was supposed to be also a drummer on stage, but he didn't show up and the pair started playing and they continue to do so, a duo - Olbrzym ("giant") and Kurdupel ("shorty") is another example that polish jazz scene is well. "Six Philosphical Games" is their first longplaying cd (the EP "frrrr..." was released in 2009).


The rules of the six games are inclueded in the titles of the improvisations like the game 3 "sit comfortably in a cosy armchair, let the wine relax You and listen" or game "listen with someone You know well or listen with someone You don't know at all". The improvisations flow naturally, and it's clear this is duo has been together for quite a long time.

Gadecki's tone on saxophone is strong, round, masculine, exuberant. No ornaments, no "licks", nothing flashy or tricky. But he's playing is clearly individual and honest, the lines direct and expressive. Bozek's on bass is a perfect partner-in-crime choosing his notes wisely, looking for intricant harmonies, adding a witty counterpoint commentary to the horn's lines. Throughout the album there are moments of pure abstract as well as some lyrical interludes (check the game 6 below), what is mantained is the immediacy of the communications and emotional intensity (not to be mistaken with volume's level). The duo's improvisation effortlessly and seamlessly vary between dialectic exchanges (beginning of game 4) and simultaneoucity that proves the kind of communications and mutual understanding that's nothing short of telepathy.

Those musicians share passion, focus, goal, joy and risks of musical adventures. Direct and honest, modest in a way, nothing flashy, nothing spectacular, but I keep repeating often this cd recently and I keep enjoying it. It's just damn good. And I have a feeling we'll hear much more from those two in the future.

Some tracks from the cd are presented in this radio playlist.
Check also the two games below as well as the concert video: