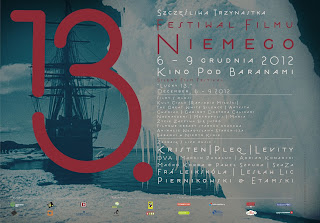 13th edition of Silent Movie Festival brought back Krakow's audience back in time to the black & white times of revolution, passion and prohibition. The times where the story to be told didn't need colour or voice. But let us not forget the fact that music was present since the very beginning. The movies were accompanied by live music,  played by musicians representing a vast variety of modern genres including experimental electronica, post-rock, improvisation as well as traditional solo piano recital.
This way the art is revitalized and re-inserted into a modern context, and the artistic results, about which shortly below, prove it to be as vital and valid as ever.

I could not follow the entire festival's schedule but I'd like to mention two brilliant duo performances. Here's the first one:

The SzaZa duo (Patryk Szamburski and Patryk Zakrocki) played music for Wladyslaw Sarewicz. If you have never heard before the name, make sure to look it up. Wladyslaw Szarewicz's movies are the very first animations ever filmed, introducing the frame-by-frame method and insects (!) as the story's heroes (a movie about ants and beetles in 1912? beat that, Pixar!). The duo's main instruments are clarinet and violin but those were assorted by entire bag of pipes, ocarinas, marimbas, mout-harmonicas, nose-flues, loops, filters etc to create music that brilliantly completed and commented the picture - the evil beetle would sound slightly like a Darth Vader, the heroic lilly's melody would be joyfull and light as the sunshine, the Santa would laugh jovially, the grasshopers would play bass and fiddle swinging brightly.
One of the most brilliantly entertaining musical performances of the year I've heard, musicians enjoing themselves and the audience equally. Pictoresque, hillarious, cartoonish, positively crazy and seemingly (deceivengly) simple though in fact carefully woven and layered together.

Enjoy the duo's poetic music as well as one of the short films screened that evening - the "Revenge of the Camera Man".