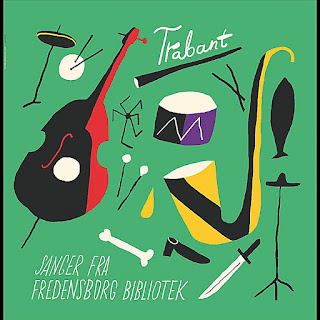 
"Sanger Fra Fredensborg Bibliotek" ("Songs from the Fredensborg Library") is a debut release (LP and digital only) from the trio I had a distinct pleasure to hear live on stage in Krakow some year and half ago. An evening about which I've written with pleasure on the blog. And as the trio's music and youthfull energy transferred so well onto the recording let me just re-use (with slight edits) words I've posted on that occasion (feel free, of course, to check the original post).

Trabant (great name if there ever was) is a sax trio which from the beginning earns my trust as this is an instrumental setting I really like, and even when played in a mainstream way it gives a sense of freedom and flexibility that really good jazz needs (just listen to Sonny Rollins trios to hear what I mean, some amazing music there). Secondly on the track list you can find a song by PJ Harvey, The Band and The Shins which earns them additional credits.
Perception of jazz as an exclusively elite and extremely demanding music is hurting it big time. And I love it when young jazz musicians admit willingly that they like popular music and it influenced they way they play jazz. The Thing turn punk outside out, Ken Vandermark after hours sings along to the sax solos in James Browns funky tunes. If you are my age you probably were listening to Nirvana. Trying to disconnect jazz from popular music is artificial and pretentious. But let me get back to the concert as this monologue is getting too long...

The music is charmingly melodic, the themes are downright catchy, the clear pulse keeps the foot (well, at least my foot) tapping. And that's not only the covers I'm talking about but the originals proposed by the band share the some song-like quality. Among the covers there's moody, dark  "Talk to you" by PJ Harvey, dreamy and enchanting "Sleeping Lessons" by The Shins and very appealing "Unfaithful Servants" by The Band. Quite a ground to cover (so to speak) and good example of how versatile this trio is.
Svein Magnus Furu posesses a very beautifull tone on tenor, fragile and gentle in slower tunes, soulful and passionate when the grooves is on (check the "Moderny Pastry" below), very Jimmy Giuffre-sque on clarinet (the enchantingly nostalgic "Fredensberg Bibliotek" on the bottom to prove that). His soloing is very melodic, phrasing reminds you of a classical jazz tunes but the melodics inspired by the tunes (including the originals) are less juzz inclined, much more modern. But that doesn't mean he can occasionaly hit a high, screaming note or polyphonic whisper.
Adrian Myhr on the bass keeps the harmony simple but not banal, his soloing is sensible, his touch is very light, very melodic. Audun Lunnan Hjort is my personal hero, his playing is infectiously energetic, he stirrs the things up, he times the accents perfectly, he both follows and pushes the solo narration, and he adds this little bit of crazy ingredient. While being very attentive to the melodic aspect of the drums, he never forgets to keep the rhythm going.

This band's musical vision is built on melodies but that doesn't mean the are afraid of letting it loose every once in a while, and though those freer passages are rare, the possibility of them happening, the open-mindset keeps the listener on his toes. The only band that can play rock tunes like that I can think of is Jewels & Binoculars (a trio led by Michael Moore which plays exclusively Bob Dylan's songs). Those guys are still pretty young, their playing is fresh, energetic and also very accessible, so, even if their names tell you nothing, be sure to check their music. Wholeheartedly recommended. Great debut.