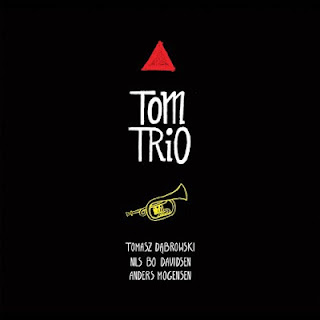 "TOM Trio" is Tomasz Dąbrowski's debut as a leader, a young polish trumpeter played an active part in jazz/improvised music scene in Denmark for the last couple of years and the international trio's release is presented by the danish ILK Records label.

The disc presents 11 composed pieces, mostly in the coincise and focused song - format, with hummable and likeable melody that manages to match the slavic romantic nature and the scandinavian, nordic cool touch.

The music shifts seamlessly between lyrical melodicism and edgy intensity, strong themes serve as a jumping point for incisive and insightfull interplay. There's the dynamic drive of "The Wave" with the heavy bass riff and cutting trumpet solo as well as the slow and dark (slightly bluesy) "Buzz Wow" right next to it.
Each tune has something to offer. "This Way Up" walks on the heavy low bass base. "Triangle" glides sofly in the shades, dark, brooding and mysterious.
"After Jam" builds a momentum on a noir theme, which dissolves into thin air, with a nice bass solo (mastefull playing throughout the entire cd), accompanied by the subtle drumming and long horn tones that takes the lead afterwards for a brief solo line. The main theme returns, slowed down and re-arranged during a pristine, dynamic and tastefull drums solo, densely filling the air with the thin resonance of the plates, until it's edginess is back on full display, clear and sharp.

Each of the 11 tracks on the album tells a short story filled with its dramaturgic twists and lines. If you like trumpet trios this cd is a valuable addition to your collection. The tunes are memorable and the playing is rich and colourfull.

As much as this is a welcomed introduction to Tomasz Dąbrowski (so far I've been able only to hear snippets of his music via web) I'm even more excitied about what should follow. In january 2012 Dąbrowski visited New York and recorded extensively including a duo with Tyshawn Sorey and trio witk Kris Davies and Andrew Drury.
Great debut, I hope more will come soon. Stay tuned.