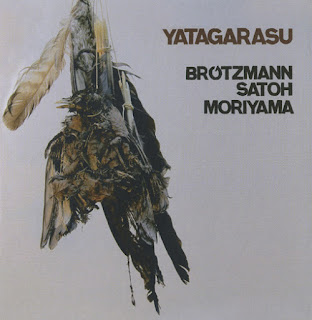 The concert happened a year ago and it was one of the finest points of 2011 Autumn Jazz Festival. In fact it was one of the finest concerts of that year. Brotzmann, celebrating his 70th birthday, fresh out of the Wels Unlimited festival, brought to Krakow Masihiko Satoh (born 1941) and Takeo Moriyama (born 1945) from Japan. Marek Winiarski from Not Two, who introduced the trio, had said the the band's performance was the best one of the Wels Festival, and it was a promise the groups has mantained (more about the concert in itself in that old post).


The concert stormed and hurricaned with energy that would shamed legions of youngster's punk rock units. The music hits you right in the eyes. No prisoners allowed. And this energy transferred well onto the recording, while a more balanced and transparent sound reveals more subtle hues of the music.
The title track begins the cd with a 26 minutes long heroic battle. Then comes the "Ice Spears" whic for me is the centerpiece of the performance. It leaves more space for the unspoken, wandering first on the edge of harmonic quirkiness of piano chords, then moving into a beautfiull, soft and lyrical ballad is played on tenor. A surprising, almost relaxing moment of peacefullness that doesn't last too long as the sax timbre becomes heavy with vibrato, distortions, squeaks, squeals and furious cry. And the tension is built, and the speed is gathered till the music pierces the sky and no one is left standing.
Which only marks the middle of the half-hour long odyssey. And from the ruins they've left they try to build a new order. And the universal cycle may continue. This one track is worth the price of the cd. Once you've listened to it, you may fell like you've witnessed the rise and fall of at least two civilizations. More than that, not just witnessed, but experienced it. Brotzmann's music is as physical and direct and primal that it's as much a "real" experience one can have.
Two shorter tracks remain just to, firstly, pick up and crash what's left of your resistence ("Autumn Drizzle") and, secondly, calm your senses leaving just the darkness and silence around ("Frozen Whistle") disturbed only by the recorded applause.

At the age of 70 and having played music for almost a half of century, Brotzmann remains one of the heavyweights of the improvised music scene. And his music has not yet lost any of its uncomprimising, vital character. So, truth be told, you should know well what to expect. If you're in a mood for a bit of katharsis, this music is for you.

a short fragment of the concert in Wels:
Autor: jazzowy alchemik o 11:00 AM