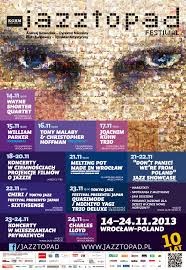 Fourth day of the Jazztopad and a change of the scenery - the Joachim Kuhn Trio concert took place in a beutiful space of Wroclaw's synagogue. White walls, modest yet refined ornamentation, dimly-lit mystical space - it all added up to create a particularly spiritual aura.

Joachim is a restless soul and the trio is yet another adventurem, and it's music yet another prove that music is and intercultural language. Kuhn's rampant and poignant piano playing is rooted in european jazz and he's playing completely invested, lost in the moment. What brings new context to this kind of expression is the sound of guimbri. The melodic riffs  would not be so unlike a blues riff in a Jimi Hendrix song but the joyfull rhythmic pulsation gave the music a particularly vital and vivid character. In fact Joachim Kuhn would tell about how he thinks real blues was born not in States but in Marocco and Bekkas's singing in the next piece showed he has a point there.

The theme would reappear as well in the "Transmitting" a documentary about the musicians' trip to Marocco and Sahara. Blues, says Joachim, is a feeling. And there was plenty of feeling on the night in the Synagogue. Intense, joyfull, searching and uplifting music. Nearly two-hours straight (!) left the musicians exhausted, but from the smiles on their faces you could tell they knew the music was worth the effort. Probably the dark horse of the part of the festival I saw.