I've been offline last couple of days but I'll try to catch up quick- Resonance is back in Krakow. A group born 6 years ago on the festival transformed from a festival project into a regular group and a whole matrix of possible musical combinations.

The alchemia evenings are exaclty that - an (al)chemistry laboratory of improvisation in a way, trying out all the possible combinations of x elements taken from y-large group. Here's the brief round-up of the first night: 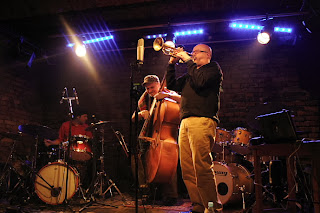 Day 1
Set I
Magnus Broo – Mark Tokar – Tim Daisy
Freewheeling session with strong pulse, heavy bass tone and panache flurry trumpet flights. As groovy as abstract (Mark would massage and tap the bass as if it was a drum instrument). You can hear the enthusiasm and joy of meeting but most of all the level of communication between the trio's members (includin a semi-conducted drums-trumpet „cuts” during the monstrous bass solo). Strong set to kick off the week. 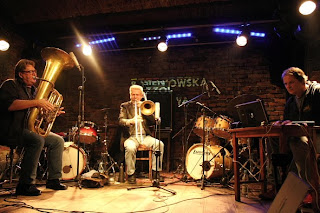 Steve Swell – Per-Ake Holmlander – Michael Zerang – Christoff Kurzmann
Musical collage filled with lyrical brass bubbles and (skrzek) of abused drums ( ) .Also a first chance to see Christoff Kurzmann on Alchemia's stage, who would loop and transform the sound recorded during the orchestra's rehersal and fiddle with elastic band attached to the laptop's screen (emulating sort of bass string sound). Not overimposing (an recurrent issue with electronica improvisers) but intriguing, co-existing in the same musical space with Zerang's percussion sound effects. Atmospehric swamp-like music that slowly draws you in. 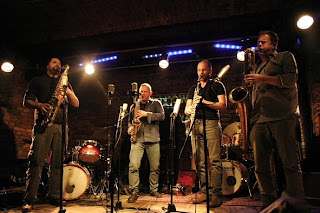 Dave Rempis – Mikolaj Trzaska – Waclaw Zimpel – Ken Vandermark.
Four reeds with Dave on saxes (alto, tenor) Waclaw on clarinets (regular and alto) and Ken with Mikolaj playing both which allowed to create intersting changes in the sonic balance throughout the performance. Together a sort of vocal ensemble where its members whould finish each other lines and exchange freely ensemble, solo parts and musical roles.